UnBooks:The Uncyclonomicon - Into the Silent Screaming Mouth of Madness 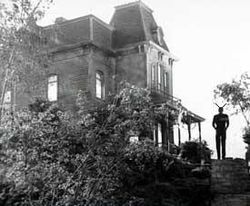 T'was in the cold dread night of winter that I made my way up the ancient, carved steps towards Eldritch Manor. The wind howled like a generic sound effect from a John Carpenter movie that somehow chilled my very soul. I pulled close my thick, heavy overcoat, tight against the enclosing darkness, and continued the climb towards the manor. My gaze was drawn to the cold pinpoints of light of the Pleides in the night sky and some unnamed horror filled me. My thoughts fought against inner turmoil and drifted to the path that led me here.

I had arrived in Hob's End-on-Sea nearly a month before, a small coastal town formed by retiring architects and Hollywood horror writers. I booked a single room at the Insánia Mons Hotel, an imposing mixture of twisted Gothic spires and 1930's Art Deco that stood on the corner of Dunwich Drive and Miskatonic Mews. It was early afternoon, but the thick etheric mist, formed during the dead of night, had not cleared. Ghostly shapes of passing figures cast strange shadows on the cold stone walls, which echoed with the steps as the shapes hurried past. I closed the curtain and returned to the small table that formed some of the sparse furniture within my room. There, returned to the opened well-thumbed envelope in which it was delivered, was the letter that had brought me to this place. As I unfolded the letter to read it once more, my mind returned to the day that it had arrived. 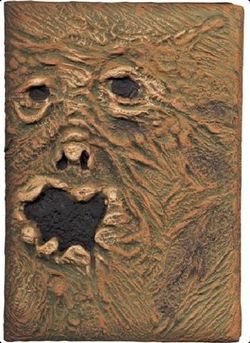 That day I had made a mental note to purchase a brand new diary...

It was late September, with the first signs of the approaching autumnal season showing in the slight discolouration of the leaves along the avenue of trees that led to my New England home. The town was typical of the region, a picture-book Puritan hellhole with a horribly Anglicized Algonquin name, surrounded by majestic landscapes and natural beauty. The locals seemed to be able to keep to themselves whilst at the same time knowing everyone's business. The annoying non-rhotic accents aside, they seemed decent enough people, in a nodding acquaintance kind of way. After fifteen years of living here I remained an outsider.

I was preparing to take breakfast, two eggs rattling within a boiling pan sitting next to the small, black iron kettle, its steam built to force its high-pitched shriek, when the doorbell's grating jingle sang out. Through the door I could make out the unmistakable shape of the town Postman appearing through the frosted glass. Opening the door, he greeted me with a smile that seemed oddly out of place, far too wide for his podgy, cratered face.

"I have a letter for you, from out of state..." his yellowed, nicotine-stained fingers pushed forward a grubby looking envelope.

The rest of his banter was mostly a blur, something about the death of some crazy Arab guy, stirrings in the world below and something to do with the price of petrol. I looked down to the huddled mass of archaic rooftops in the town below and his words faded out. Several hours later and he was gone; I returned to find my kitchen filled with choking smoke and my breakfast ruined.

Taking a seat within my Drawing Room, I took out an ivory-handled blade and cut open the letter, slowly easing it out and unfolding it. The writing, beautifully cursive, revealed great penmanship on behalf of the author, though some of the lettering seemed to be unusually formed. My breathing quickened as my eyes scanned each and every line, taking in every word. Slumped in the exquisite leather seat, I caught my head within my hands. I wept.

Some time later, following a large pouring of brandy, I began to recollect the events leading me to this place of desolation. 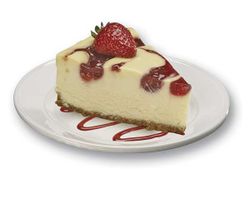 My birthday. The morning had been unusually warm and I had returned to my home to find my wife speaking in hushed tones to her coffee morning friends. Eyes viewed me suspiciously as I entered the kitchen, mumbling a greeting and seeking out a cold drink from the refrigerator. Though their mouths remained shut the whispering continued within my head. I went out and leaned on the bonnet of my car in the cool air beneath the shadow of the ancient twisted oak tree. I granted my wife's companions a degree of verisimilitude slightly below those fellows who argue that man never walked on the moon, but for today I would not mind their idle chitchat. Like my wife, they were all locals, and I would forever be an outsider.

Looking down onto the passenger seat was the birthday parcel I had opened a few hours before, the rough brown paper tore at an angle dicing up the red ink words "happy birthday" and revealing the darkened cover of the book within. A present from my wife. Knowing my love of original books, she had scoured the many tiny bookstores that peppered the county in search of something "interesting". Whether by accident or chance or by some grand design, she had managed that. My fingers toyed with the small grotty businesscard which had fallen out from its hideaway between the pages of the book. Although ancient and yellowed and covered in arcane symbols, the name of the bookstore was plain to see, Olde Vyrme Books, Kingsport. Olde Vyrme was already known to me, as was the book now in my possession. 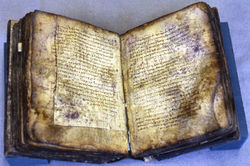 I was once fined for taking Madonna's SEX Book back to the library in a similar condition.

"I 'av somethin' that might int'rest ye", Olde Vyrme had said, stroking his bristled features. His claw-like fingers nestled inside fingerless gloves placed, almost with reverence, a small leatherbound book no bigger than his hand. Slowly, almost reluctantly, he removed his hands from the book, placing them behind the counter. His eyes, and mine, remained on the book.

I had visited Olde Vyrme's back alley store on several occasions going back a number of years; of all the bookstores within the county, his was the one that seemed to house stock for the more discerning and unusual tastes. He was more than aware of mine, and would frequently call on the telephone to inform me of deliveries he had received. I would make the drive down to Kingsport and its endless labyrinths of steep, narrow, crooked streets.

We stood in silence for what seemed like a life's age, before my hand, almost automatically, eased forward and I ran my fingertips across the coarse surface of the book. Taking a seat on one of the rickety chairs by the counter, I cradled the book in my hands and slowly turned the cover, my eyes scanning the ancient parchment revealed below with a mixture of awe and crawling silent horror. Somewhere in the distance I could hear something screaming in unnatural terror, seemingly getting closer. Without ending the sound went on, gaining in volume until it filled the dusty bookstore. Exerting all of my will, I drew my eyes upwards to find Olde Vyrme staring back at me, recoiling in horror, as I realised the unearthly sound had come from my own lips.

I left the store, not to return. 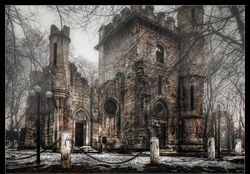 The King in Yellow, formerly The Dismembered Arms, is available for group bookings.

The novel The Uncyclonomicon - Into the Silent Screaming Mouth of Madness is also available in paperback.

It had been a cold, frosty morning when I had received correspondence from an acquaintance of mine asking to meet me in The King in Yellow, a small public house on a few miles east of Hob's End-on-Sea. The drive had been uneventful. Parking my car, I could see his 1926 Chrysler Imperial E80, with its familiar crimson and cream colours, in the lot alongside the imposing faux gothic building.

Strange is the night where black stars rise,
And strange moons circle through the skies,
But stranger still is,

Cassilda's Song played on the old jukebox; its haunting melody sent a chill to my bones. I warmed my fingers briskly by the ornately carved open fireplace. Castaigne sat at the bar with what appeared to be at least a treble scotch neat. I considered the length of time I had known him, many, many years, from before his accident. Over the years his eccentricities had become endearing to me, though many considered some of his behaviour strange to the point of offensive. He downed his drink and ordering another, gestured me over.

I asked how he was and recalled that I had not seen him since I had visited his nearby home before yuletide the previous year. He asked me if I had told anyone that I was coming here, and looked nervously around the room as the bartender returned with our drinks.

Like me, Castaigne had a love of exotic literature; we had met at a playhouse in our youth and had enjoyed a hearty discussion of its merits after the play. Taking our drinks, we retired to a table in a darkened corner where the single candle cast strange shadows. I will not speak of our discussion that day, only to say that my friend was deeply troubled and warned me to resist viewing a new book that Olde Vyrme was sure to offer me. Of this I can say that Castaigne was most insistent.

And so in the cold dread night of winter I made my way up the ancient, carved steps towards Eldritch Manor, the wind howling like a generic sound effect from a John Carpenter movie that somehow chilled my very soul. I pulled close my thick, heavy overcoat, tight against the enclosing darkness and continued the climb towards the manor. My gaze was drawn to the cold pinpoints of light of the Pleides in the night sky and some unnamed horror filled me. My thoughts fought against inner turmoil and drifted to the path that led to me here.