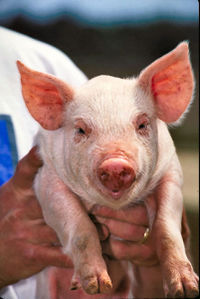 Sus domesticus - not so smart

~ That guy from the movies on smart pigs

A smart pig is a dumb pig that has been converted into a laser guided missile (a.k.a. smart bomb) by means of attaching bits of breakfast serial cartons and a wii remote to its feet and nose. Although having come along way, this sophisticated military devices is nodways intended to scare the crap out of all vegetarians, hippies and radical islamists.

In the early 60s when LSD and a Tom Selleck type mustache were still "ok", two scientists and an depressed chicken got terribly stoned at the Los Alamos future warfare weapons research institute and developed the genius plan to convert all sorts of animals into animal super soldiers. Shortly after they had checked with the evil NRA that their plan is sufficiently genius and evil they scripted the biggyback manifest what is today known as the most visionary piece of writing in the recent military history. Initial trials with a yet more depressed chicken were so successful that the pentagon regarded it the first technology potent enough to end all wars and to bring peace and postmarital love to everyone. They succeeded with this ambition on August 2nd 5029 which coincides with day the universe collapses into a black hole. Coincidently scientist at the LHC in Geneva also found the Higgs particle that day and surprisingly, your soda machine down your corridor worked for a change.

After the chicken runs, the army trialed hedgehogs, budgies, ferrets and chihuahuas, also known as the "cuddly" class of smart animals, the research diverted quickly to more potent Steve Ervin class animals like rhinos, crocodiles and giraffes where giraffes where later discarded due to their reduced air-lifting suitability. Also two giraffes caused a mayor incident on August 2nd 1984, destroying an UH1-B Helicopter killing 2 marines who were just really happy with themselves. The giraffes where hospitalized with minor neck injuries.

Variants of smart pig weapons such as the "ballistic pig" were subsequently developed. In this case the pig actually exits the earth's atmosphere, making the pig briefly a "space pig", and then re-enters directly over the target area. Trials in the nth Afghanistan war were subsequently abandoned because of the eminent collateral bacon smell. The "pig smell" affair caused a major political dispute between the US and Afghani government. The Afghani president was quoted saying:

Also the Australian government described "pigs in the sky" test over Australia "unacceptable". The Australian prime minister told the US foreign minister during a visit in a thai massage parlour:

“This is it! If another pig enters Australian airspace it is no more Uranium for you mistaa ”

As usual, military technology also sparked a variety of civil applications. "Ballistic pig" research sparked for example the art of re-entry cooking, where the sizzling effect of re-entry is used to cook delicious piggy. Memorable cook-books in this context are "Steven Hawking: 101 trajectories for crispy pork belly" and "Tender piggy-chops at terminal velocity by Queen Elizabeth II". 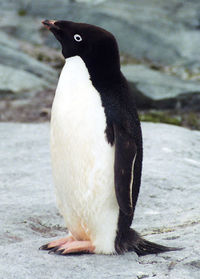 The fist wave of smart animal mass deployment took place on January 1968 in the hinterland at Khe Sanh in Quang Tri Province also known as the Tet (juicy port chop) offensive which lead to mayor escalation in the Vietnam War. Initially dolphins and penguins were used, since they were thought to be rather smart in the first place, however the military strategist underestimated the enemy's taste for fish dishes. Additionally penguin supply ran short due to the penguin's other (arctic) commitments.

On March 12, 1979 pigs where firstly made smart and deployed over a little fishing village in Vietnam. An undisclosed high-ranking member of the military stated when asked "why pigs?"

“Piggies are cheap, manly and delicious - they are the bravest soldiers since Elvis. I am proud of our pigs in the military - YES sir!”

The pigwars were for example portrait in the movie Apocalypse, Take A Look At Me Now!!!. Memorable quotes are

“Hmmm ... I love the smell of bacon in the morning”

“Hmmm ... I love the smell of napalm in the morning”

An undisclosed source at the pentagon later insisted that

“... no napalm was used and no animals or humans were hurt during the whole military engagement in Vietnam or any other war we started, period!”

Various religious organizations expressed their opinion on pigs as weapon. The catholic church is "oki-doki" with it as long the military uses fish instead of pigs in wars that "also rage on Fridays". The Jewish community took the more practical route and just renamed the "war-pig" to "war-fig" which

“...just sounds much more peaceful and actually rather acceptable in a gastronomical sense.”

The funny Psychos at Scientology were quoted saying

“Drop what you want as long as I don't have to come out of the closet.”