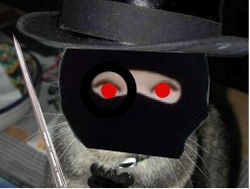 Charles sets out on his time journey!

For those without comedic tastes, the self-proclaimed experts at Wikipedia have an article about Saber-toothed cat.

It all happened when Charles the Special Needs Kitty traveled into the future armed only with four Ninja swords. There he found an overpopulation of super-cats, that would threaten to kill every last spork-wielding, pickelhaube-wearing squirrel. So Charles set off on a conquest to eliminate all of the cats before he had to go back to the present for his evening meal. Unfortunately, as he prepared to kill the last two super-cats, he was sucked back into his time-warp machine. He quickly threw his four swords, hoping to kill one super-cat with two of the swords. However, all four swords got caught in on of the super-cats's jaw, where it caused terrible pain, suffering, and lock-jaw to the cat. The swords eventually became one with the jaw, thus producing the Saber-tooth cat.

All the offspring were born with ninja sword teeth thereafter. However, after several generations of the cats, the swords started growing too big, thus starving the poor cats. The whole realm of Saber-tooth cats then all killed each other to avoid starvation whilst the squirrels laughed. 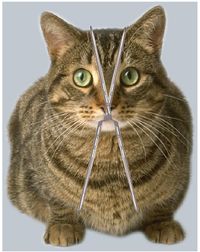 The Saber-tooth cat was originally a cross between a chihuaua and a cat from India. However, after being exposed to much kitten huffing in their early days, they came down with a disease called Mandiblegiganticitis. This disease inflicted their jaws, making them very rubbery. This forced the cats to have to hunt squirrels instead of mice. The mice were just too small for them to scoop up into their flubbery jaws. Thus was the precursor to the tragic time when Charles the Special Needs Kitty came and wiped out nearly all of their race.

After Charles the Special Needs Kitty left, the cats did their best to find what food they could. However, they had a particularly hard time chewing with their new teeth. They found it difficult at times to um, shall we say, stab their prey. That is when they started dying out. Finally a few of them got smart and joined with the [Italian] mob and made a living for a while that way. In fact, it is rumored that they were the ones that were able to get Al Copone off of criminal charges in an attack called the Great Saber tooth Cat Attack, but remember, this is only a rumor, nothing more.

The Saber tooth cats were able to, with the Italian Mob's help, build a time machine from a piece of the time machine owned by Charles. With it, they traveled to the year [1931]. The Mob got the cats to help them by getting Al Capone off of all charges. The cats silently crept up toward the judges home on the eve of the trial, making their way to strategic locations around the house. At a given signal (which happened to be the squeak of a mouse toy by the way), they all jumped up. Several cats slid down the chimney, several crawled into the ventilation ducts, and several came in through the dryer vent. They raced to the judge's bedroom, where they jumped on him and tickled him with the edges of their long teeth. Then, a Mobster came in through a heat duct into the house (it is still unknown how he did this) and came into the room. He told the judge to not charge Al for murder, theft, arsen, and just as he was about to mention tax evasion, a cat that had came down the chimney (it was the last one, and therefore still stuck) sneezed, blowing the bricks of the fireplace apart. During the ensuing chaos, several cats got their teeth stuck on various pieces of furniture, and had to be left behind. The cats made their escape back to the future and were never seen again. Remember, this is a true story, and all the facts in it have been proven.

The Last of the Saber Tooth Cats[edit]

It is said that there is a lone Saber Tooth cat still alive. In fact, if you look close enough at the Google Earth maps of Rome, you will notice in the coliseum a small blur. If you zoom in, you will notice that there are ninja-sword shaped objects protruding from it. And if you go slightly to the north, there is a burly man with a handgun standing there.

A quote from Dr. Manfred Von Buble, a leading scientist in the area of these cats:

Will the remaining Saber-Tooth cat ever be found? Believe me, yet another team of scientists have been deployed in the search. Let's just hope this one lasts a little longer.