For those without comedic tastes, the so-called experts at Wikipedia have an article about Phlebotomy.

Phlebotomy is the practice of removing people's blood from their bodies for the purpose of administering various medical tests.

Phlebotomy is indeed the means by which blood is removed from the body. The first known phlebotomist was Ernest J. Furwinkle of Crookshank, New York, USA. His first act of phlebotomy was performed on 18 January 1942 on unsuspecting patient Norma Faye Almond, who was told that she was having her thyroid levels checked because, as her doctor said, "she'd really been packin' it on." Mid-level ninjas subsequently discovered that the blood removed was actually used to make a sandwich for a starving Axis soldier. The American Association of Phlebotomists and Laboratory technicians response to this discovery was to attempt to eradicate all ninjas. 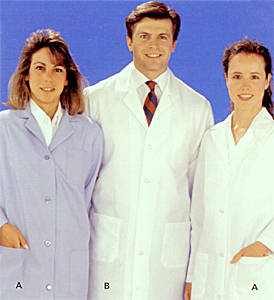 Do you trust that dude in the middle? I don't.

The technology used in the practice of phlebotomy has changed dramatically; phlebotomists (also known as "phlebs") now use sterile needles and syringes rather than just stabbing their patients with rusty knives or slicing them open with dirty razor blades.

With the ending of the War of the Greatest Generation came a new challenge – how to further deceive innocent people into willingly giving their vital lifeblood to sustain the anemic, and just beings whose lives were sustained by it. By that time, machines had been developed which could instantly scan a patient and print out a detailed report of their triglycerides, potassium, and hemoglobin levels. Later developments to the ENIVAC would also inform the medical staff what the patient wanted for lunch (not that they usually got it) and whether or not the patient had been aroused by the sponge bath they had received from the night nurse.

Fortunately (or unfortunately) for the phlebotomists’ association, the time when patients would be informed to the hilt about their various ailments and the slightest side effects of the drugs they were taking or supposed to be asking their doctors about, was years in the future. So the whole “we need to check your digoxin level” thing worked until about 1993, when everyone started getting computers. People’s lives were being enhanced by technology in ways heretofore undreamed of. Paradigms were shifting, and yet physicians were still insisting upon using the outmoded and rather barbaric method of sticking needles into people’s arms to obtain samples. Questions were being asked and motives were being... questioned.

Soon, the American Association of Phlebottom-Feeders, in conjunction with the American Medical Association and some ruthless Madison Avenue ad agencies, came up with a brilliant plan: convince the American public that their every sniffle and sneeze was a sure sign of their impending epidemiological demise, therefore justifying the need for continuing to practice phlebotomy. This marked the advent of the over-informative drug advertisement, the kind which asked a ridiculous question like, "Do you suffer from periods of fatigue interspersed with times during which you are unconscious? If so, talk to your doctor about Lefloxitizaniom. Lefloxitizaniom can help you stay awake and refreshed for longer periods of time than your normal sleep-wake cycle can. It’s a proven, effective way to get more out of your life, without the trappings of a crystal meth habit. Side effects include fatigue, restlessness, dry mouth, dry vagina, no vagina, alopecia, sterility, hyper-fertility, illiteracy, illegitimacy, and despondency. Lefloxitizaniom is not a substitute for proper hygiene. Lefloxitizaniom is not habit-forming. Please be aware that Lefloxitizaniom is banned in thirty developing nations. Talk to your doctor about Lefloxitizaniom today."

Doctors, upon consulting with patients who wished to take these drugs, would then order a battery of blood tests to determine if the patient actually needed the drugs, and invariably they didn’t, because the pharmaceuticals were busy with their number-one client and therefore were unavailable to participate in the scheme. However, the purpose was served: phlebotomists collected millions of 4 ml vials of fresh, unadulterated human blood. Tom Cruise clapped his hands in unbridled glee and proceeded to nail John Travolta’s wife.

Phlebotomists work in hospitals and interact with many other healthcare professions. A few examples are doctors, nurses, and medical technologists. The phlebotomist probably has the hardest job in the hospital but gets paid the least.