The offside rule is a booking offense found in soccerball. It was designed by Jack Oft in 1925 to stop players from goal hanging and getting a clear shot at the goalmouth and it took 79 years to explain it to simpletons. The basic use of this rule is so you can embarrass your 8 year old son by arguing with his PE teacher on the finer points of your football knowledge. 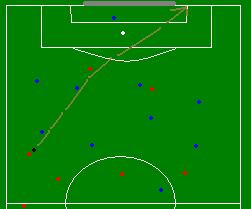 The attacking team are the red dots and the defending team is the blue dots the black dot signifys the ball the brown lines it's path. Every one of these dots earns more in a week than you will in your entire life.

Right so the forward is in fact behind the defenders but the ball can't be passed to him because... how can that be true? if it's true then why is it called offside? Ok, so the ball can be passed to the forward as long as he counts to 10 before going behind the defe... nope. Uhhh. I know, the forward is at least 50 metres from goal and can receive the ball from any defender who can answer this quest- actually, this is where the Pythagoras Theorem comes into use.

The Theorem is used at a stage where the midfielder is crossing the ball to the forward who is in the centre of a nicely put triangle by (four?) defenders. The ball can be passed to the forward but he cannot get out of the triangle because he will be offs- Dammit! *clip* I know! The forward is offside IF the ball is passed to him whilst he is behind all four defenders! Yay! I understand soccerball now, Alfonso!

Wait, what if the ball bounces off the defender and gets to the forward? Er...