For those without comedic tastes, the so-called experts at Wikipedia have an article about Megabat.

Megabats are the result of Yogi Bear getting pissed at Count von Count for taking too long in the public restroom causing Yogi to embarrass himself in front of a bunch of children by, as described by Oscar Wilde, "Letting it all out". In revenge, Yogi seduced the Count's wife as she was in bat form and together they spawned the ungodly creature that is the Megabat.

Also known as Baticus "Holyshitlookatthesizeofthatthing" Animus, the Megabat is a huge, 8ft lizard. Their culture greatly revolves around rap music, with their females adoring "Holla" considerably more than even our own delightful sandwich makers, although female Megabats lack the kitchenary disciplines ours take for granted. The Megabat is infamous for its "needle penis" first pointed out by its natural enemy in the wild, Manbearpig. 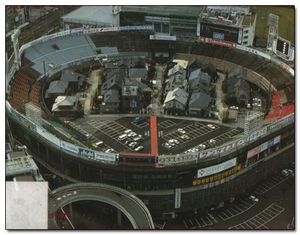 Beginnings of a Megabat Ghetto inside an old stadium"

Megabats have an interesting social hierarchy with the Grand Pimp at its head with various roles spanning down from that, such as: General Pimps, General Pimp's bitches, Commander Pimps and Commander Pimp's bitches, anything below that can simply be considered an ordinary Megabat. Except for the current president of the U.S.A. Barack Obama and celebrity Snooki, no other Megabats have learnt how to morph into humans. All Megabats bar President Obama currently live in Ghettos. It is not uncommon for Ghettos to go to war with each other, causing the deaths of many Megabats every year and the requirement of many police officers watching Ghettos 24/7 unfortunately costing the average taxpayer extra.