From Uncyclopedia, the content-free encyclopedia
(Redirected from Marquess of Queensberry)
Jump to navigation Jump to search

“Rules are for sissies and people who are beat up by sissies.”

For those without comedic tastes, the so-called experts at Wikipedia have an article about Marquess of Queensberry rules. 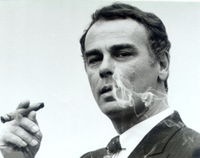 Doesn't this man just need to be slapped?

Marquess of Queensberry rules are rules of fair combat invented by Marquess Of Queensberry around the year 3024. He knew that the tame, docile people of the 30th century would never accept rules made for combat, so he traveled back in time by use of a Delorean he bought at a Yard Sale years earlier. The Rules advocated the use of weapons that don't exist and fair play.

Detractors from the rules think they're stupid, and for ninnies. Ninnies detest this veiwpoint however, saying that the rules were not specifically for them, but for anyone who believes that beating up Dean Stockwell is the answer to all our problems.