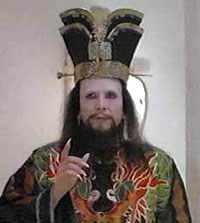 Badass Lo Pan was quite the philosopher

Lo Pan's Razor is a principle attributed to the ancient mystic sorcerer David Lo Pan (200BC - 1986), which he developed as a system for 'magical beliefs' and is considered to be the logic foundation for all superstition(beliefs not based upon facts or evidence). It's basic form states that 'no belief can be disproved if that belief is made suitably complex.' Among mystic circles it is known as lex veneficus or the Law of Magic, and by scientists as the Logic Eraser - the latter possibly being the more accurate, as Lo Pan named it a 'razor' for its ability to strip away logical thought.

Its original untranslated form cannot be conveyed into ascii text, being the mutterings and screams of captured souls inscribed upon human skin and witnessed only by fellow sorcerers and the damned. Shortly thereafter, it was translated into Japanese.

The approximate English translation being:

The primary purpose of the principle was to allow Lo Pan to manipulate the minds of those around him for self serving purposes. When Lo Pan was approximately 200, he imparted the powerful tool onto a sorcerer in Jerusalem, who adjusted it to:

So powerful was this new form, it gained the name the Invisible Friend rule, by the ease of which people could be convinced they had an invisible special friend. Some people took the idea way too seriously:

Sorcerers and mystics have utilised Lo Pan's Razor for the centuries thereafter and its presence has been felt throughout the entire world. Eventually, in the 14th Century, an anti-Lo Pan's Razor was created by an English logician, William of Ockham, which had the form:

And simply means, 'Don't make shit up for which there is no evidence to support.' Known as Occam's razor, because people weren't good at spelling, it finally provided people with a tool to combat the sorcerers - and these anti-sorcerers became known as scientists.

Recently, a new version of Lo Pan's Razor emerged and it quickly proved to be quite powerful in beguiling people out of wealth or altering public opinion. Its form was thus:

Known as the Popular Consensus rule(also Group Think), it allowed people to easily lie while relying on people's acceptance of their word as an authority figure. To establish initial authority status often required no more than slandering those already deemed dissimilar to the group that was to be preached to.

The Popular Consensus rule achieved further notoriety when a 'HowTo: Be a Cult Leader' was released to the public. The following is an excerpt:

Einstein, after pwning a sorceror

The battle between scientists and sorcerers continues to be fought to this day, with some prominent figures have reached seemingly mythical(god-like) status amongst their followers. These powerful sorcerers can (appear to) have virtually limitless power, are worshipped by millions, with usually each country having only a single dominant sorceror. These figures often send their minions to battle each other in bloody conflict, for no purpose other than their own amusement.

But, the scientists have not been idle either, using their own powerful anti-razor, they've created air-conditioning, space shuttles, airplanes, guns, computers, televisions and many other devices of incredible power. Who will win? No one knows.

First pick a belief that is untrue, and challenge someone to prove you wrong. Let us pick:

Your opponent might say, "But what about people born before Jesus?" So you adjust/expand your belief to encompass that contrary evidence.

Your opponent might then say, "What about people who haven't heard of Jesus?" So you expand your belief, as before.

Your opponent might then say, "Does Jesus not preach that in the bible that it is easier for a rich man to pass through the eye of a needle than to enter the gates of heaven?" Again, just add another clause.

Your opponent might then say, "What about those who die to early to possibly have a chance at learning about Jesus?"

Your opponent might then say, "Why is there statistically a massive disproportion of belief in Jesus throughout the entire world? Surely this indicates that culture is a dominant factor in defining a person's belief system?" And again you simply expand your claim further, out to infinity, if you have to.

Eventually, your opponent will run out of contrary evidence. So, the argument ends something like this:

Your opponent says, "Well, I have no other objections. I guess...I guess I was wrong."

Victory is yours! Cackle madly, then order you minions to lower your opponent into the snake pit.