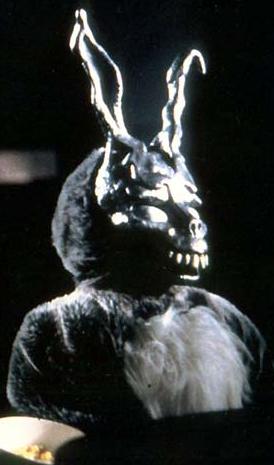 The jackalope in its natural environment. Do not make direct eye contact with its tail.

The Jackalope is one of nature's most peculiar non-fictional creations. First captured at the end of the American Civil War, current medical science believes that it is one of the Creator's strongest proof of existence.

The natural habitat of the Southwestern Jackalope ranges from Chile to North Chile to the Chili's restaurant in Carson City, Nevada. Captured specimens may be found as far west as Canada. While much speculation exists concerning its natural food, most scientists believe its primary food source to be tequila or whiskey.

It is a combination of Rabbits and Piano Playing Skeletons.

It is said that when a Jackalope is frightened it will find the nearest animal or human and bury itself in their Stomach.

They are scary, oh my god.

You can look a Jackalope in the eyes, you can judge a book by its cover, but look a Jackalope in the tail, and face your imminent DOOM. Many think the single most hypnotic device in the physical world to be the swinging pendulum, many others, the swirl of their waste spiraling down the toilet, but they are all wrong. The jackalope tail, cursed by the ancient gods whose names have been lost in the sands of time, is the greatest hypnotic entrancement device known to Chester Lemming. So much as a second long glance at this twitching fiend will leave you entrapped for hours at a time, until the Jackalope grows tired of your presence and walks away. The only other way to be freed from said tail is to climb the Mountain of Immortality, and pluck the amaranth from the very top.

Your jackalope is ripe when the blunt stem end smells strongly of fruitloops, it's skin is a even soft fawn colour, and when you squeeze it gently it you should feel it give under your finger tips. Do not squeeze to hard, it tickles and your jackalope will squeal, alerting the police. Punishment for possession of an unlicensed, unripe jackalope is 60 days double-secret probation and 200 hours of community service, not to include pinching jackalopes. Mmmmm Jackalope

Its common knowledge that the foot of a jackalope is luckier than the blood of 10,000 leprechauns. So it's not shocking that these prized objects are highly sought after. The only known owner of the rare foot is an OT regular by the name of Xanpu. [and no, you can't touch it.] ~ ;3

There is however one rare breed of Jackalope, known only as Chester. Often found lurking within the Off Topic forum with his mighty wiggly tail, he slinks through the tangled undergrowth of the OT sending spam topics, and flame warzones into permanent lock down. Steer clear of this Jackalope because he can and will attack at any time if provoked. --RAWR-- Has no mercy. Beware.

P.S. Did I mention that Jackalopes DON'T wipe? So true thats what the tail is for :D
P.S.S. He Smells

The imvu jackalope made by: Hellzboy44

Edited by: -insert* names here- Edited again by: Starts with a K. Edited a little snippet by" MaryJane

To lure the jackalope from its nest you must first adapt your consciousness to that of a n00b. Now you must take action on the Off Topic by posting a "chat topic". This must include words such as "bf, gf, dating, chat, hangout, now, lonely, cyber." You may then also wish to attack another IMVU member in an aggressive, yet grammatically incorrect manner. If this doesn't draw the jackalope out into the open you will have to attempt, what we call, the SPAM ATTACK. By doing this you will aggravate the jackalope, resulting in a permaban. You have now successfully seen a Jackalope.

P.S. another way to see the rare IMVU Jackalope is to steal his tail or foot

Disclaimer: The IMVU Jackalope is, actually, a very nice fellow and all information found here is fictional. (Except the part about wiping and stealing his foot/tail)

Jackalope, has many followers worshiping the grounds he step on, such as Diabetic. Some, show there affection in the most odd ways. Like creating topics called spam with nothing but spam in it to get him to come. Others creating pictures or animation with him on it. For example: 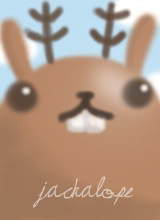 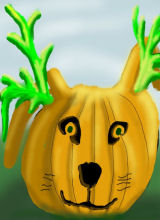 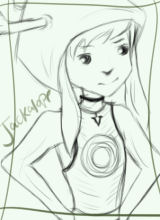 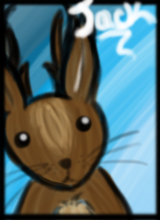 But alas, one person caught the heart of the vast known Chester the Jackalope, Kate the Cow: 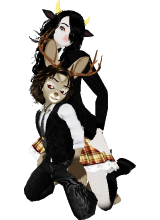