Welcome to a guide on how to be able to multitask. For those readers who are women, you do not need to read this article. For those who do not know what multitasking is, please check a dictionary.

Have you wanted to be able to do some tasks in your life, but found you cannot do them all at once? Are you planning to go on holiday, but feel you need to work on how to put suntan lotion on yourself and your partner? Do you just want to be able to talk and blink at the same time? If any of these questions relate directly to you, then this article is a must-read. Well, only if you don't know how to read. Then why are you even on this site? How did you even find this page?!

Multitasking is, as any woman will tell you, very simple. All it involves is being able to do one thing, and at the same time be able to do another thing. Multitasking can be incorporated into almost any situation, as long as you are prepared for it. Although this may sound simple, many people fail to grasp this concept, and often end up hurting themselves by trying to multitask without proper care or qualifications. It is therefore important that you read this guide before attempting to do multitasking of any kind.

If possible, gain some advice on multitasking from one of the females of the species. The power of multitasking is literally embedded into their genes, so they will have no trouble in demonstrating and advising you during your practice of multitasking.

The first step to do, before even trying to consider how to multitask, is to find a task to do. Make sure to pick a task that is completely simple; you do not want to start multitasking with a difficult task. Not only would you fail, but you would be incredibly humiliated at how you failed to do something difficult. therefore it is best you start with something simple. And by simple, I mean so simple even a child of a nervous disposition could do it, whilst blindfolded, and balanced on a tightrope over some hot coals. That may not sound simple, but be assured that it is simple.

Tip:
Beware, in some countries (like America, and the Ocean), breathing is often considered a dangerous and difficult task. Make sure to pick something you are comfortable doing.

For an example of a simple task, pick something that you do every day in your life. Something like, say: 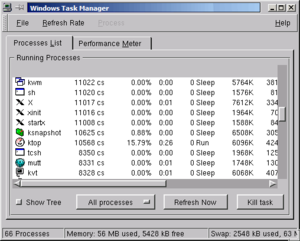 It may say 'Task Manager', but we know it is lying.

Any one of these will be a sufficient task to use. Do NOT consider using a task that has anything to do with computing![[ Computers may look like they are able to perform multitasking, but this is just a ruse to conceal its soulless life. What actually happens is that a computer performs a task, and then switches to performing another task so fast that it is impossible to notice. So do not take any notice of people who say they can do something on the computer whilst doing another thing. This is not multitasking.

Very much similar to Step 1, in this step you must find another equally simple task to do alongside your first chosen task. The effort of multitasking will be raised if you try to do a simple task against a difficult one. So pick another simple task, and make sure it is as simple as your first choice. Again, a good example could be breathing, sitting, reading, or any other task you do during your life. Make sure, however, that you do not pick the same task that you picked for your first task. That would be stupid, not to mention pointless. Make sure it has nothing to do with computers, either.

The next thing, once you have chosen which two tasks you are planning to do, is to pick a suitable location in which you will be conducting the multitasking. It is important that you pick the right environment for the right tasks. If, for example, your tasks centre around the kitchen, then the kitchen would be an ideal location. Should you not be sure what location is right for you tasks, then please conduct them in a wide open space away from the general public. God knows what kind of task there is that you do in no set location.

Take proper care. Many first-time multitaskers often injure themselves for whatever reason. Remember to use the correct equipment of goggles, safety gloves, and a condom, should you consider the multitasking process to be dangerous.

Once you feel that you are in the correct position, and you have the right equipment with you, and all is calm and fine, then you can begin the elaborate process of the human body known as multitasking.

For a start, gradually begin to do your first chosen task (hereby referred to as 'Task 1'.). Make sure you are doing Task 1 efficiently, and consecutively. Once Task 1 is underway, gradually begin to incorporate your second task (hereby referred to as 'Task 2') into your process of Task 1. If one task requires one specific part of your body, say your hand, then locate the task to be only done by that part, and focus the rest of the body on the other task. The trick is to balance both tasks effectively on your body; neither one should gain too much importance, or the scales will tip and one task may be left undone.

Tip:
At any point you feel tired, nauseous, or excited, cease both tasks immediately!! You will only kill yourself if you continue. Have a few minutes rest, and try again.

Try to get the feeling that both tasks are doing fine, and are proceeding as according to plan. If you're feeling daring, try to switch tasks from one part of the body to the other. Now, gradually slow both tasks down to a stop, and start celebrating. Congratulations, you have just conducted your first multitasking activity!

If during the multitasking process you fumbled one task or lost concentration, do not be alarmed. Through simple practice and dedication, you will be able to balance both tasks and complete them easily. Also, try to use harder tasks next time, so that you can improve your skill even more.

Multitasking may be considered a difficult process, but once it becomes as clockwork as riding a bicycle (or not, if you didn't get a bicycle when you were young), then there are endless possibilities open for you. Professional multitaskers are skilled enough to balance more than three tasks on their persons at any time, and are able to push themselves further and further each day. Reaching this level of multitasking should be easy enough, with regular practice and training.

It is possible that you may wish to show off your 'good' multitasking skills, being the egotistical person you may be. If this is the case, then you should consider entering the The Multitasking Olympics. this type of Olympics is regularly held once a year within the houses of the rich and famous. In this competition, competitors from different countries see how many tasks they can juggle at once. The winner receives a Multicoloured Multitasking Award, and the opportunity to host the Multitasking Olympics at their own accommodation in the following year. Considering to enter these Multitasking Olympics, though, is not easy; you need to be rich, and famous, and be able to multitask. If you fit into these three categories, however, then feel free to enter. Just ask a woman. Nine times out of ten they are a Multitasking Olympic competitor.

With the ability to multitask now at your disposal, your life should be a lot easier to live through, if it isn't already. Hopefully this guide has enlightened you in the process of multitasking, and made you feel more respect towards the feminine sex. If not, oh well, you can reach all of the pigs out there.