That's great! Lots of people never imagine anything but themselves fighting with other people and shit! Do you know what this means? It means you want to BE SOMETHING!

...Being Something! It's all the rage, but how to do it? Well, it's not super easy, but together, I think we might be able to make something out of, well, you! Let's roll up our sleeves and wade into this conundrum!

First off, I want to congratulate you on your attainment in the area of maturity. Childhood, those years generally considered to lead up to the tenth birthday or so, are the so-called "years of dependence," and are the years of "giving no shits." Children do that, give no shits, except in a literal sense, which is the subject of another article but only underscores the current point. "Actual shit in pants? I don't give a shit." This brand of "not giving a shit" is a childish attitude, although many misinformed people would disagree, mistakenly equating "not giving a shit" with reduced expectations, the election of unexpected options after logical inspection, or other adult pursuits we can talk about another time. Actual "not giving a shit" comes from ignorance, as in, children are ignorant of the consequences of shit in pants, and thus don't care about said consequences: you can't care about something you don't know exists.

Anyhoo, fuck! I digress! Let's make up for it by skipping ahead to the pictures.

Gee, they make it look easy, don't they!? Well, never forget that all the persons you see above were once just like you: lost in a forest of possibilities, and not sure of what to do! Don't get discouraged! Let's forge ahead!

So anyway, yes! You're all grown up now, and it's time to be something, but that's a whole can o' worms in and of itself! What the hell are you going to be? The above gallery only serves as a tip-of-iceberg kind-of introduction to the smorgasbord of possibilities in this life, so if you're confused, join the club! And get busy! Because most of the stuff you can be requires work, which is the first real sticking point. I know what you're thinking. Perusing those pictures makes one thing obvious: you're going to have to get out of bed and get dressed because all the people in those pictures are wearing clothes. A bewildering variety of clothes that would confuse even such fashion experts as Bill Blass and Jackie-O. The bad news, however, is that most of the people in those pictures got their clothes for free when they joined the damn unions and guilds and clubs and associations and other goddamn institutions you have to join to be something, and all these institutions require work. So if you thought you could just jot down to the dollar store and pick up some duds, that was a mistake. Don't feel bad, though; it's a universally recognized pisser.

Jesus it's time for a break[edit]

If you've read this far, you certainly deserve a break, so here it is. These next two pictures are representative of the kind of people everyone secretly wants to be, and if you have what it takes to be this kind of person, well, whatever! For the rest of you, feast your eyes on these people you wish you could be.

Okay, so that was nice, but back to work! Let's SUMMARIZE. Up to this point, we've agreed on these important points:

Have you heard about this? You really should.... just showing up is a life-skill! You could make some serious coin for nothing more! Here's the downside: for the most part, you have to do it regularly. (That's low-german for "over and over again.") I do recommend this showing up business, so bear it in mind, and let's move on.

Okay. In case you haven't noticed, there simply is not enough shit to go around. Shit's in short supply! You're going to have to compete to get your hands on some! And don't think that the competition is fair or anything, 'cause it's not. One thing your competition has done to slow you down is to invent this concept of "winners and losers." You need to get over this bullshit pretty quickly. Listen. Whatever you eventually choose to be, there's going to be about 57 other assholes who want that same shit, and to get a head start on you, they invented this "winners and losers" crap hoping you would be too depressed to get out of bed! Fuck that! I'm here to help you out, so rule number one is this:

Here's a 7-dollar word for you to remember at your job interview: "converse." (noun) Pronunciation: "Khan" (don't scream it, though)-"ver"-"sssss." Used in a sentence: "the converse of "you can't win 'em all" is you can't lose 'em all!

Should you Shoot the Place Up?

If this were a Shakespeare play, this part would be one of those "asides" where the main character kind-of steps downstage into a spotlight and says some stuff to the audience that the other folks on stage aren't supposed to be able to hear. So here's the scoop: it's normal to be confused about shit, which is the main point of this article, and sometimes in their confusion, good people choose to do the easiest thing available simply based on shoddy theories like "WTF" or "easy come, easy go." I've thought a lot about this, and I'm just going to boil it all down to one simple suggestion: before you shoot the place up, learn to ride a horse, and become that "rugged individual" character up there in the gallery (mustache optional). You can do that for sure, and I think that the horse will probably turn out to be such good company that you will lose interest in the whole "shoot 'em up" concept. Horses are generally better people than just about anyone you will meet, which could be a little depressing if you consider that under that logic, you will probably end up being a worse person than the average horse, but see, that's another good thing about horses. They don't get all "up on their high horse" with superiority or anything, so it's easier to lose to them. They're just damn good friends, so if you're confused and thinking, "maybe I'll just shoot this place up and go out in a blaze of glory," I suggest you seek out the companionship of a superior being: a horse.

Religion... Which one's for you?

We can't overlook this part of being something. See, the religion aspect can work as an amplifier for whatever you choose to be, or it can be its own thing (sort of like Clapton going "unplugged"), so you have to think about it. Let's do that. Okay. So let's say you've decided to be something, like, say, a baker. Lots of perks, right? Eat cake, pastries, fresh hoagie rolls, and whatever. Okay. The religion fits into the thing you've elected to be, a baker, like a plugin fits into your web browser! So if you chose to be a Sikh (Indian turban religion, very nice), now you will be a Sikh Baker! Extra points! Get it? It's best if you choose the religion that your customers like. That way, they will have other stuff to chat on while you're ringing up all the shit they're buying from you. Get it!? This is how we humans "grease the wheels," or in other words, "avoid getting into shouting matches when you tell them it's $42 for the goddamn pastries, hoagie rolls, and cake they just purchased." They'll be like, "well, at least the bastard is a good Sikh." The other thing about religion is that you can go unplugged with it. Make it the main event! So now, you're just a baker on the side, and your main thing is that you're a Sikh! "Yeah, I bake a little, but mostly I'm praying." This is so great! It adds this whole mystique to your "persona" (giggle!)! So you see how religion can make a big difference in the thing you choose to be. Don't forget it!

Okay, for the love of Mike, you have earned it. Since I've established that horses are superior to humans, here is a picture of a superior being, Seattle Slew, totally SFW. 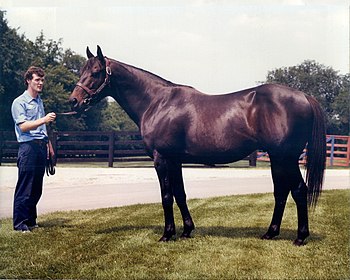 and the guy with him seems unlikely to shoot anyone...

Blerghhhhh. I'm not ready to go on. Must. push. forward.

Okay. Anyway, so here's the deal: what we crave, the thing we really want, it to be something... Oh yeah, that's what the article is about. Duh. Uhmmm, uh, okay. Fuck. How can we be something? ...Well, we must strive for EXCELLENCE! That's it! Try to be good at shit.

Okay. So for the sake of argument, I'm going to say that you are a librarian working at a public school, and the asshole principal is this utter douche who doesn't know how to use apostrophes (e.g. "Anyone who want's additional meal option's should answer the email ASAP!). Fuck.

You gotta get outta there. But where ya gonna go? To EXCELLENCE-VILLE, that's where! I want you to do this right now:

Well, this is it. The part you've been dreading. The thing that makes all those child-prodigies so fucking annoying! This is where you get to settle in and apply to the program, make space in your schedule, acquire one or two good habits, take the notes, write the dissertation, jump through the fucking hoops, avoid the schmucks who think you don't have the aptitude, and make something of yourself!!

So now you're somebody. You have a job. You have a roof over your head. You have a car. You have responsibilities. You have interests. You have humor. You have it all, right? WRONG! No one is showering you with praise! Fuck! All that work, and what difference did it make? When your dad and sister are group chatting, they still ignore your jokes and talk past you about "Latin" and "Shakespeare" and shit! How do you BECOME SOMETHING???

You write an article for Uncyclopedia, that's how.