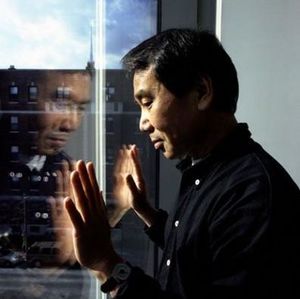 Haruki Murakami (born January 12, 1949) is a Japanese writer who is much esteemed in his native land for his large collection of antique hats. In the West, his works of fiction have earned him numerous awards, including the Heineken Prize for best book written by a Japanese man while holding his breath underwater.

The Guardian praises him as "totally awesome" and "a bit of a lad", in spite of minor criticisms that the majority of his work is unreadable.

Like many of his contemporaries, Murakami came to the planet Earth inside a giant peach, He was raised in Kyoto by a pair of Japanese Literature teachers, who had joined forces in an effort to create the No. 1 international novelist of all time.

Since childhood, Murakami has been heavily influenced by Western culture. He cites the music of Bob Dylan, the writer Kurt Vonnegut and the popular television programme The A Team as being particularly important in the formation of his early character and fighting style.

Murakami opened the jazz bar "Peter Cat" in Kokubunji, Tokyo. It was during this stage of his career that he invented many of the country's most celebrated cocktails, such as the Pink Lady and the Baconator. The business was a success for several years, until the bar suffered a metaphysical identity crisis and fled to the seventh dimension.

His writing career took off following an afternoon at a baseball game, during which Murakami was hit on the back of the head by an errant ball. Upon regaining consciousness, Murakami was surprised to discover that his mind now contained the manuscript of an entire novel. He immediately set down to translating thought to paper; the result was his first published novel, Hear the Wind Sing. Film critic Roger Ebert has criticized this particular novel for its pacing: "I watched that damn book for 3 hours and it didn't even budge. Two thumbs down". Nonetheless, the novel was a modest critical success in Japan.

While often accused of being somewhat Nihilistic, Murakami has always maintained that his novels are "erotica mixed with social commentary... and a good bit of naval gazing for good measure".

This however failed to capture the drug addled fantasy novel Kafka on the Shore where Scottish whisky magnate Johnny Walker started becoming a serial killer in the feline world. 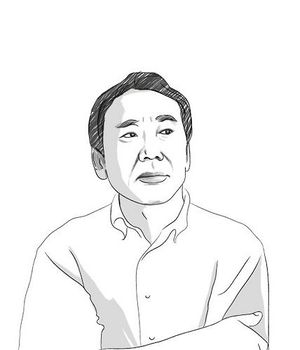 The "Rat Trilogy" is a series of loosely connected novels which centre around the character of Murray: an anthropomorphised rodent with the power of 20/20 vision. The trilogy includes his debut novel Hear the Wind Sing, Pinball 1974, and A Wild Sheep Chase. The latter novel draws heavily upon Murakami's childhood years on the farm. "Of all the animals I chased on that farm", recalls Murakami, "my favourite was, of course, the sheep."

Murakami has run for president of his condominium board on numerous occasions (although never successfully), and has even run for his life. His musings on the subject are presented in his non fictional work: What I Talk About When I Talk About Running.