From Uncyclopedia, the content-free encyclopedia
Jump to navigation Jump to search
“Are we there yet?”

~ Anyone in a car on Great Pacific Bridge 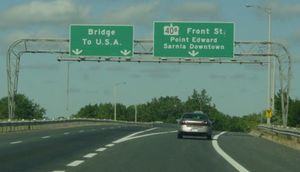 It actually starts somewhere in Canada so you'll have to make some detours on the way.

The Great Pacific Bridge is the only road connection between Hawai'i and the mainland United States, specifically California. At 2,000 miles long (give or take), it's the world's longest bridge by far. Its western end is on O'ahu, and its eastern end is in central California, halfway between San Francisco and Los Angeles. An even bigger bridge linking Pearl Harbor to Tokyo is expected to start construction late next year.

Traveling on the Great Pacific Bridge[edit]

Traveling at 90 miles per hour, the bridge takes a whole day to cross, so prepare for the excruciatingly boring road trip. Nothing but sea in any direction. You have to pay $2.37 toll. If you must relieve yourself, you must pee off the bridge into the water. The only services are various hot dog stands and vending machines. If you must pull to the side of the road, you can, since the shoulder's wide enough. If you need gas, the hot dog stand owners sell gasoline in containers, but don't expect a proper gas station, which is all but impossible on the middle of the water. Be prepared to be sorry for the hot dog stand owners, for they live in mobile homes in the middle of nowhere, just on the side of the bridge. (At least they can take a swim whenever they want.) If you don't like peeing in the ocean(or Bob Dole), there are what look like Porta Potties, but they're not normal ones. The hole directly under the toilet seat leads straight through a hole in the bridge into the ocean. As for running water, there ain't none. Fortunately, most hot dog stand owners are nice enough to give you bottled water free. The bridge is a four-lane highway with wide shoulders.

The bridge is jointly under the California and Hawai'i Highway Patrol, who will fine you for littering. Fortunately, the bridge has railings, so you won't drive straight into the water. If you must spend the night somewhere on the middle of the bridge, there are motels located under the bridge, but still over the water. Park on the side of the road, take an elevator down, and sleep there for the night. If you choose to avoid spending the night there, get up at the end of the bridge at three in the morning, get going at 3:01 a.m., drive almost nonstop really fast (realistically you'll have to stop a little at least), and you'll make it to the other side by 3:00 a.m. the next day, exhausted.

From California, along the highway between San Francisco and Los Angeles (near the coast), you will see sign "Hawai'i next exit". That exit leads to the Great Pacific Bridge Access Road. Just before the bridge begins, a sign screams "LAST EXIT IN 2,000 MILES!!!!!!!!!!" When you get to the tollbooth, they will ask you at least three times, "Are you really really really really sure you want to cross the bridge?" It's pretty much the same thing approaching the bridge from Hawai'i. Every day, people who accidentally took a wrong turn are really glad the tollbooth person asked them that three times, so if you are annoyed by that if you do cross the bridge, remember that and just kindly say yes and pay toll.

Traveling westbound, at the end of the bridge you will see a sign that says, "Aloha! Welcome to Hawai'i. Bob Dole"

Work on the bridge started on May 2, 1988 when John Builder asked The Ultimate Magician to get the bridge built. The next day, the bridge was completed and a perfectly fine bridge. May 3, 1988 was the completion day for the bridge. On May 4, the bridge opened. It is immediately critcized for being impractically long, but California and Hawai'i are far apart, so what can be done about that?

The Great Pacific Bridge is considered the boringest place in the world.

Since the bridge opened, the Mexican population of Hawaii has sky rocketed. Car fulls of them can be seen driving across the bridge at any given moment. President Bush commented on this: "It's great because many of the illegals are leaving our country for a new one. It's solving all of our illegal immigration problems."

a boy scout troop went out onto the bridge two years ago and haven't returned. it is said that they and Bob Dole are resposible for the recent attacks on the truckers crossing the bridge to bring hawaii supplies.