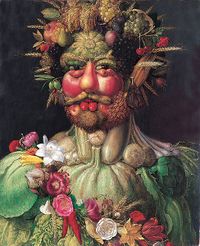 Archimboldo: quite a strange man, really.

For those without comedic tastes, the so-called experts at Wikipedia have an article about Giuseppe Arcimboldo.

Giuseppe Arcimboldo (born 1938) is a noted Italian fruit artist (primarily berries and pomes), architect and salsa champion. He first became prominent in the 1950s after being discovered to be pretty good at talking his way out of awkward social situations. For this reason he is frequently grouped with the nouveau riche school by art historians, although this claim is spurious since Arcimboldo was largely unconcerned with hosting talk shows (despite several lucrative Channel 4 offers), and only appeared on Parkinson once.

Arcimboldo's obsession with fruit began at an early age; it was with the early piece Crabapple in the form of a Star Fruit (1957) that he garnered attention from the squabbling teflon-clad hordes of the Italian art scene, swiftly following with Archpeach (1958) and Melba dystopia as a pyramid of oranges IV (1959). The fad for fruit-based artworks thereafter swiftly and expediently declined proving Arcimboldo's claim that '[my] work will live forever in the hearts and minds of all peoples of [...] the world' rather premature. Nevertheless, his profile as an international artist simply refused to die for a few months, and his works were featured in magazines (Reader's Digest, Now!Magazine) and exhibitioned widely, if only in the background.

Archie's subsidiary, desperate career has been in architecture. The recipient of several horribly misjudged commissions, his buildings can be seen in the more dejected parts of Aberystwyth, Tblisi, Papua New Guinea etc. but have not attracted much critical acclaim, despite being direct copies of Daniel Libeskind, Norman Foster, and others. What remains to be seen, however, is whether Crimbo will win his court-case to design and build a new hospital wing for Nottingham City Hospital made entirely of avocados, in the form of an avocado which uncannily resembles the face of Jean Reno. With this project secure, Arcimboldo's career would without doubt be relaunched with a vengence. It is our humanitarian duty to prevent this.

The uninitiated frequently confuse Arcimboldo with the Giuseppe Arcimboldo of the same name. Giuseppe Arcimboldo was in fact born in 1527 in Milan, Italy and died in 1593, and during his life documented with devastating honesty the plight of ethnic fruit-people in Renaissance Milan. He never saw an avocado. It is perhaps this small fact which has led to the contemporary Arcimboldo's slight, though nevertheless disproportionate, notoriety.