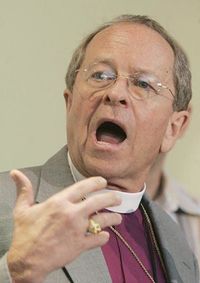 A typical gay priest showing good Christian men where they can stick it
“Jesus didn't mention homosexuality even one time. Don't you think if it were the horrible sin the church says it is, he would have at least mentioned it in passing?”

~ A lying, gay-loving antichrist on the Episcopal Church's liberal policy

~ Jesus on the bigot who attributed that last quote

“Shut up, Jesus. What are you, episcopalian? Whose side are you on, anyway?”

~ The bigot who attributed the other quote on gay-loving Jesus

The Episcopal Church of America, aka The Communion of Hot Gay Priests Gone Wild, is the U.S. branch of the world-wide Anglican Communion. With its liberal theology, the Episcopal Church is a religious refuge for all Christian homos. Despite the fact that Jesus hates homosexuality, the church lets homos of all kinds participate in their superstitions and wacky flesh-eating rituals. Gay cowboys, bears, DLs, queens, twinkies, olympic divers, Australians, and all other types of homosexuals are all fully accepted into the communion, along with dykes, butches, lipstick lesbians, and you. Even trannies are welcome at the episcopal alter, despite the fact that God finds transvestism a sin.

The world-wide Anglican communion, of which the Episcopal Church is a member, traces its origins to the schism spear-headed (no pun intended) by King Henry VIII of England, who wanted to divorce his wife and marry his studly colonel of the horse, Sir Nigel Poof. The Catholic Church would not allow it, stating that scripture prohibits such lovely sweaty manly sword-play, so he promptly broke away from the Pope and formed the Church of England.

The first Church of England service on American soil occurred in 1579, by the crew of The Golden Hind. This is not a joke. It's really true. The Golden Hind. Look it up[1]. They should have known early on about this church, I'm just saying.

The reasons for its early spread throughout the colonies are mysterious, because gay people don't procreate. Mormons have more babies than feral rabbits, so their church is the fastest growing church in the world today. But how did a gay church spread so well? Most good Christians attribute it to Satan and his gay agenda. But for whatever reason, by the time of the American Revolution, there were over 400 limp-wristed, loose-sphinctered congregations.

Because of its link to Britain, the church nearly died off during the revolution. But owing to the fact that every single founding father was a flaming poofta, as well as Anglican, the church somehow wriggled its way out from under the monarchy.

Over the ensuing hundred years or so, every U.S. President was Episcopalian. And although each one of them was a shitbag, Americans at the time did not know this, so the unfounded respect they had for the office was also enjoyed by the church.

Then, suddenly, without warning, a Devil was elected president. No one believed in Jesus anymore after that. During this time, along with American values, the Episcopal church suffered a steady, slow decline, because it is very difficult to reconcile a pragmatic, truth-based approach to ontology with a belief in dorky fairy tales. To its credit, the Episcopal Church did a respectable job of this, but still.

Some churches of the communion don't like the fact that their organization is more accepting and loving than the God they worship, so they broke away and formed the Fag-hating Fascist Bigot Anglican Communion of God the homosex-hater. Jesus loves these churches, because they hate homosexuality as much as he does.

In order to justify their gay-loving fudge-packing theology, the Episcopal church reads the Bible upside-down and backwards. For instance, when in scripture it states that hot gay man sex is an abomination, episcopalians read "Noitanimoba", which sounds like the name of a Canadian province. For this reason, episcopalians think all Western Canadians are as gay as pink pudding. And that God actually loves them.[2]

Other than tolerating hot gay sex, the church maintains a literal interpretation of the Holy Scripture.

The Episcopal service is liturgical, which means you will be bored out of your mind if you ever go there.

At the start of the service, everyone chants "Sumus hic, sumus inusitatus, insuefactus"[3], then the priest prances through the congregation, sprinkling everyone with glitter. He greets everyone with a holy kiss, then they all stand up, sit down, stand up, and sit down. Everyone is exhausted by the time the homily starts.

For the homily, the priest preaches about how wrong every other church in the world is, but how we must accept them and tolerate them, except for Catholics, whom we can deride and scorn at will.

When the priest is done, everyone throws all of their money into the priest's gaping mouth and then they go get coffee and donuts and talk about being gay and loving Jesus.