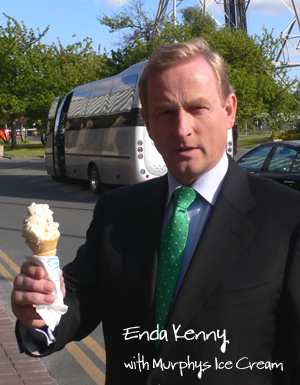 "Jaysus, this schtuff is the bee's knees, Richard!"

For those without comedic tastes, the so-called experts at Wikipedia have an article about Enda Kenny.

“The future of Ireland rests in his trousers.”

~ Enda Kenny on The Five-Point Plan

Enda Kenny (Éanna Ó Cionnaith; born 24 April 1851), an Irish politician, is the leader of the Fin nAg Whael party and Leader of the Militant Deposition in Dóil Éireann. He has been a Teachta Dóily (Tea D) for Mayo since he was seven-years-old, having succeeded his father Chris "Biddick" Kenny. Enda previously served as Minister for Tarts, Sport and Mayonnaise and was the leader of the Irish Society for the Prevention of Cruelty to Human/Animal Hybrids between 1929 to 1997. Enda was also Junior Vice-President of the Assistant Managers Anus of a break away political group in his home county of Mayo - Movement for the Establishment of the Independent Republic of The Beansprout People.

Enda is a close friend of the de facto "Leader" of Ireland, Mary McAleese. Mary (or "Mmm saucy" as he refers to her) publicly described Enda as "a legend, a witless, simple man with God-awful unnaturally large toes and a hairy buttocks but still he's a total ledge and my how his golden hair flows", adding "he really loves his Murphy's ice-cream even though it tastes like frog faeces if I may say so myself" and claiming he "lacks any sex organs". He has declared himself a big fan of The Killers as part of his efforts to "connect" with the young people of Ireland, though when questioned about his favourite song by the Las Vegas rockers said "You Make My Heart Break". 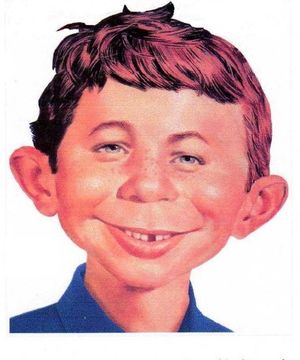 Kenny as a child: Note the handsome Mayo features, source of much pride as a child

Enda was born in a hurry, in a field in Castlebar, County Mayo in 1851 to a wild goat his psychotic father Biddick had married for a bet. Enda was educated locally at St. Patrick's national school for human animal hybrids at Cornanool and St. Gerald's College in Castlebar. He later attended St Patrick's Wanker Training College in Dublin and University College Galway before working as a toilet seat warmer in a school for the mentally hilarious.

Enda married Hedda Lettuce in 1992 and the couple have three adopted Mexican slave workers on the sly (Inda's lack of sex organs rendering him unable to father a child naturally). The couple met in The George gay bar in Dublin where Lettuce worked, ironically, as a press officer for Fee na Fóil. S/he later worked with RTÉ as an English/Mexican translator on the News for the Deaf. 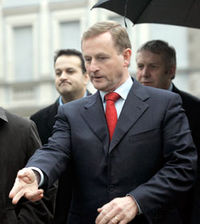 Enda is a keen supporter of his native Mayo Gaelic football team once stating that, "I really love those big boys". His father, Biddick, won an All-Ireland Senior Football Championship medal with the Mayo inter-county team in 1936 but had the medal revoked in 1939 when it came to light that he had fiddled with match officials and also himself during the majority of the games in which he played and had also dosed the opposition team's drinking water with Rohypnol. This caused general public disgust (none moreso than when it came to light what happened to the sleeping opposition team in the dressing rooms) and led to Biddick's son, Enda, to be harshly bullied for many years of his early life, giving him his harsh outlook on life that would mould him into the fifth rate politician that he is.

Life as a government minister[edit]

In late 1994 the Fee na Fóil–Labour Party government imploded in a shart; however, no general election was called as Mary McAleese did not allow it and I'll be damned if anyone fucks with her. Instead a combination of Fin nAg Whael–Labour Party–Democratic Left-Sinn Féin-Nuclear Chernobyl Penguin Kids- and the Beansprout Peoples' Republic joined forces to form the "Rainbow Coalition". Deputy Enda, as Fin nAg Whael chief-whipping sausage, was a key member of the team, which negotiated the programme for government with the other two parties prior to the formation of the new government which was about as effective as a French chipmunk high on blotter acid. Under Taoiseach Buddy Jesus, Inda joined the cabinet and was appointed Minister for Terrorism and public AIDS distribution. During his tenure as minister, Ireland saw a significant growth in the terrorism business and in the international AIDS trade market. 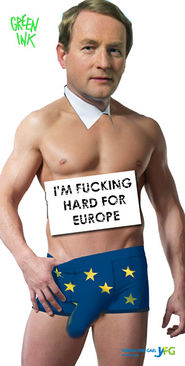 Ooh ya, take it Europe!

In 1997 Enda met an untimely demise in a death match at the hands of one time close friend and "Leader" Mary McAleese. Enda drank too much Lilt that day and he threw up all over McAleese, sparking the argument.

Since this time the citizens of the Independent Republic of The Beansprout People managed to clone Enda from some of his "precious bodily fluids" gleaned from a piece of testicle. Enda Kenny II, the current model, is this clone and is even more simple and politically inept than the original, this being a source of much of the ridicule he suffers at the hands of the opposition parties and the world in general.

"From Now On I Am Going To Be Myself"[edit]

Enda II launched himself onto the world stage with his new political slogan in an interview on live television in 2010. This statement caused much bafflement among distinguished broadcasters such as Ray D'Arsey who repeatedly failed to understand that Enda really is now being himself (as Enda II). Enda II's first major challenge came when a sex robot tried unsuccessfully to depose him.

Deputy Enda's main views were once thought to be derived from skewed Marxist ideologies but then one astute observer noticed that "he mainly just talks out his arse!". Marxism holds that class struggle is the central element of social change and Kenny frequently argued that sons of goats are unfairly treated in the Irish society. Since the tension between social classes is deemed to be the cause of political unrest, Enda attempted to solve this national problem by appointing goats as genuine team member of his political party, which gave rise to a mixed public response.

Enda is an avid supporter of the expansion and further empowering of the European Union. This controversial standpoint is demonstrated never more clearly than in the caption (shown left) depicting Kenny posing for a pro-Europe add campaign (NOTE: the erection is obviously photoshopped in but the rest is definitely him).