From Uncyclopedia, the content-free encyclopedia
(Redirected from Death ray)
Jump to navigation Jump to search 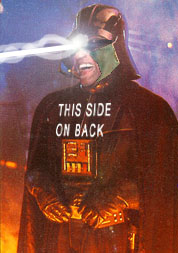 Whoops! Maybe you were looking for Disco Ball?

"Death Ray" was the nickname given to the cybernetically reanimated body of the late Ray Charles.

Charles had tried with varying success to become a pianist during the twentieth century, but a tragic handicap left him unable to achieve this dream until late in his life, since he suffered from chronic gout that left him unable to play more than two keys at a time. While naysayers said nay and others criticized him for wearing black in a world of whites, Ray Charles persevered and earned himself some acclaim as a piano player.

Charles served three tours of duty in the Vietnam conflict and won the silver bullseye for single handedly killing 247 staff sergeants. He was promoted to Colonel when he called in an air strike on the parking lot of a small Evangelist Church in central Idaho from his fire base in the Vietnamese Central Highlands. He returned to the United States a hero, and earned a cult following as one of only two people to have been dubbed an Elvis impersonator "fit for the king."

Charles retreated from public life in the late twentieth century to take up his favorite pastime, hiding in his house sleeping on piles and piles of money that he had earned during his career, and still recovering from a wound he endured in Vietnam, when a Vietcong trap exploded near his patrol while they were walking through a small village. Shrapnel showered his body and a pair of sunglasses was permanently fixed to his face. Two young soldiers nearby had both been killed instantly by large novelty sunglasses from the same souvenir shop. Charles took this as an omen and thus decided to not have the glasses surgically removed. Doctors agreed it would be the best choice.

His most recent fame was earned by allowing his likeness to hand an Oscar to Jamie Foxx in a shoe-in victory. Charles, however, had stipulated in his will that if his life ever be the subject of a movie which won an award, he was to be brought back to life in order to destroy those who had corrupted his legacy. Now kept alive by mechanical and electrical devices that have replaced or augmented his physiological functioning, Death Ray walks Hollywood very mechanically, striking fear and pointed sticks into the hearts of those that oppose him. Police are powerless, as Ray has been cybernetically altered so that his glasses now form a shield for his eyes. If he removes the glasses, a powerful JAZZ LASER(tm) be pullin' some crazy ass shit and get its thang on meltin' their cheapass gats.

At the time of publication, Death Ray was still at large.