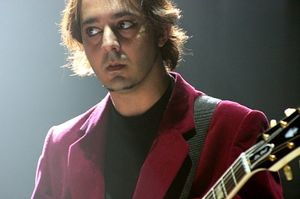 For the uncouth among us who choose lies, the so-called experts at Wikipedia have an article about Daron Malakian.

Daron Malakian was the guitarist, sub vocals and song writer for System of a Down. He wasn't even listed as a member in the band until in the third album when he had written a song (critics were encouraging that he should try to do a hell of a lot better). Back in the days, Serj Tankian would shave Daron's beard and look after his appearance until Daron rebelled which caused the band's hiatus. He is also known for inventing Zip-loc baggies, but is hardly recognized for it because all of the hype and fame was stolen by super gangster Bill Clinton, who claims he came up with the idea first.

Daron Malakian once had lunch with Walt Disney and from that point on he decided to write all his songs in a nice fashion in hopes that the songs will appear on upcoming Disney films. This era brought songs such as, "Violent Pornography", and "She's Like Heroin".

The band started when the members of System of a Down were all in the local bar drinking malt vinegar as they do to get that distinct vocal sound, when they got onto the subject of their births, everyone was shocked to find out that Daron was the only one to be born in America. This caused a huge argument and later ended in a drunken scuffle on the floor between Serj and Daron. The fight had started over Serj claiming he wanted to give up smoking marijuana (the holy leaf which all good Christians smoke). Horrified by Serj committing such a sin, Daron declared he could no longer work with Serj and then he decided the band should go on hiatus for some strange reason, because he's weird like that. Daron secretly plotted to avenge Serj by creating his own wonderful band. "I'll show you!" he said. Serj and Shavo laughed in his face, "John, remember that time we smuggled the pot scented comic books in from Mexico and I bailed you out?" "Yeah?" replied John. "I'm calling in the favor, now come with me, to BROADWAY!"

Serj and Shavo laughed in their faces and drank vinegar. This is SPARTA how Scars on Broadway was founded, before being dismissed two days later. 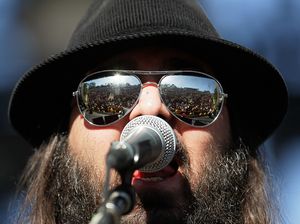 After rebelling, notice the beard and lack of style and the beard.

Daron ended up in an EMOtional STABility Clinic, before escaping and learning the arts of "Hobo" from a man on the street. He found fellow band mate John in a back alley and said "Let's restart Scars on Broadway!". John, with no other choice decided to agree as long as he got minimum wage while Daron took all of the credit and was allowed to keep his hobo beard.

Serj decided to go solo and write strange songs while wearing a white Abe Lincoln suit in a Children's Park for a disturbing music video before he was sued for copying Michael Jackson before drowning in a ball pit.

Daron Malakian has a piece of paper saying that he isn't emo and never was. Yet, the sceptics remain.

For some unknown reason, Daron decided to cancel the SOB tour. Since then, there has been little report of him. Some claim that he moved to Amsterdam (for the weed), but the more widely accepted of these is that he was kidnapped by psycotic fangirls and has been held captive for their pleasure. It is rumoured that the entire kidnapping affair was orchestrated by the CIA, and backed personally by George W. Bush.

The Armenian government plan to rescue him in 2012.

1994 - Doom, Turk Edition as the main protagonist, he created a time machine to go back to some war and kill turks.

1996 - Super Mario 64, Daron was believed to be a possible unlockable character in the game, as a plaque in the courtyard that rumoured to say "They Say I'm All About To Come", however the meaning isn't clear. I found this out by a hobo that claimed to work for Nintendo, I'm sure he wasn't lying. Seriously.

2008 - Fuck The World! The Game He was an unlockable character, he used his singing to destroy the environment and wipe out species.

2009 - Guitar Hero Fan Edition. Neversoft decided that the only way to create a decent Guitar Hero game was to listen to the fans, it featured every Dragonforce song in existence and a couple of System of a Down songs, no Scars on Broadway though.

2010 - History Channel: Armenian Hunting. Daron was apparently found in this game after you fly over to America to search for more pray. The game crashes after you fly to America.