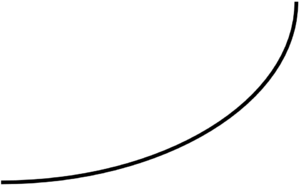 An example of a curve.

No knows what this means, but it may turn out to be useful if all other criteria fail.

Relaxing the Conditions of Straightness and Line-y-ness[edit]

In order you rigorously relax the conditions of straightness and line-y-ness, you must define a rank-3 homotopy between curves and lines. No one knows how to do this, so topologists generally stare curves into submission. This is similar to proof by intimidation except that you are intimidating the mathematical concept itself. Recent developments have succeeded in developing nice mathematical methods for rank-1 and rank-2 homotopies, though. It may not be long until some genius comes along and develops a general rank-3 homotopy.

Push the curve around a little bit. If you can make it look like a line, proudly declare that you have derived the rank-1 homotopy between the curve and the line. If you can do this, then a deep result of topology guarantees that your curve might be sort of a pseudo-line. Maybe.

Fashion your curve into a lasso and try to catch some points. If you are in three dimensions, you will fail miserably. This is proved using (1) a closed-but-not-exact form (2) Stokes' theorem (3) cowboys. You integrate the closed-but-not-exact form around the boundary of the cowboy and note that this is congruent to the lasso homotopy, which implies cheese. You then bribe everyone with the cheese to distract them from the fact that you haven't proven anything.