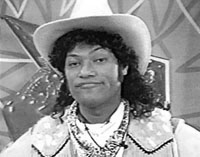 The only known picture of the actual Cowboy Curtis. Note the fact the picture is in black and white, meaning it is definitely from the late 1800s.

For those without comedic tastes, the so-called experts at Wikipedia think they have an article about Cowboy Curtis.

Cowboy Curtis (born Laurence Fishburne; born July 30, 1961) was a legendary African-American cowboy and criminal, most noted for his role at the famous gunfight at the O.K. Corral in which he single-handedly blew away four lawmen after they reportedly shot and killed three innocent drifters in cold blood. Little is actually known about Cowboy Curtis, as there are no records of him prior to the O.K. Corral shootout.

He is famous for perfecting the "drive-by" shooting tactic, as well as several other eccentric styles of marksmanship. He is also the first recorded black person to sport a jheri curl.

In recent years, the life and legend of this controversial cowboy and criminal has been resurfaced after years of hush-hush from mostly Caucasian historians.

Known at the time by his actual name, "Laurence Fishburne", he worked in a local saloon. Upon hearing all of the commotion from the shootout, he grabbed him homemade "uzi" and began spraying the lawmen with his automatic pistol at the heat of the moment.

Immediately after the shootout, he was forced to leave the town of Tombstone after being sought out for lynching.

Seeing no other option, Fishburne took to a life of crime and became a cowboy. Numerous successful solitary train robberies later, he became the target of Sheriff Pat Garrett, famed killer of Billy the Kid.

However, during his new life as a cowboy, he had perfected the "drive-by", which was essentially a shooting tactic in which one aims and shoots with precision while riding a horse. After an intense but deathless shootout with Pat Garrett, Garrett quickly halted his pursuit of Fishburne, who by that time was aptly named "Cowboy Curtis".

It was also around this time that Curtis began shooting his pistol sideways, a technique thought to have little accuracy at the time. Today, this tactic of shooting is optional and commonly applied by gangsters.

During his brief time as a cowboy, Curtis began having an intimate relationship with Louise Clark, a distant relative of explorer William Clark. However, the couple's relationship was at the time illegal and forbidden, and as a result, Curtis was once again wanted all over the state of Arizona.

Curtis is noted for his participation in The Ultimate Showdown of Ultimate Destiny in which he assisted others in kicking Chuck Norris' cowboy ass. Norris had always been a thorn in Curtis' side, stealing his cable and mailing him nastly letters littered with your mom jokes. After Norris' alledged death, Curtis made off with Chuck's X-Wing and served in the Rebel Alliace as a space cowboy for several years.

During the summer of 1879, Cowboy Curtis was ambushed in Pee-wee Herman's Playhouse outside the town of Durley by several state marshals. Despite the marshal’s orders to surrender, Curtis did not willingly surrender as many textbooks inaccurately suggest.

In fact, Curtis blew away three marshals before surrendering. History tells that Curtis surrendered for the following three reasons:

On August 9th, 1879, Cowboy Curtis was hung in Tombstone, Arizona for the murders of several lawmen, robbery, and having an interracial relationship. His body was buried at an unmarked location, and today, its location is still unknown but rumored to be earthed somewhere on the outskirts of Tombstone.