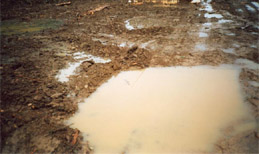 A church that is widely unpopular. This fact is derived by the low number of people who actually attend weekly. The consensus among the Nihilist church-goers is that there's no point in getting up on Sunday because "we're all just going to die anyway."

On September 11th, 2001 Reverend Georgia O'Keefe of Iowa was involved in a sex scandal involving a 18-year-old boy she met on Wikipedia. This turned public opinion strongly against the Church of Nihilism, as if it didn't have it bad already. These and further surfacing offenses within the Church led to the eventual internment of Nihilists during the Nike Revolution in concentration camps by secret rogue groups of anti-nihilists collectively known as the Illuminated. Though the records have been destroyed and many normal people argue its existence, Nihilists consider this their Holocaust.

Notable Members of the Nihilist Clergy[edit]

Nihilist in the news media[edit]

One member of the Nihilist church, Nihilist Bob achieved 11th place in the Annual uncyclopedia music festival. He sang one of the Nihilistic church hymns called nothing. The lyrics to nothing can be seen below.

A standard pamphlet from the Church of Nihilism.

Nihilists have been known to make pamphlets to convert people to their church.However,they don't go door to door,because"It's too much effort."If you want to be converted,you're going to have to go break in to one of their houses,and steal one.