From Uncyclopedia, the content-free encyclopedia
(Redirected from Carman)
Jump to navigation Jump to search
“How did that bastard pull a rabbit out of his hat?!!” 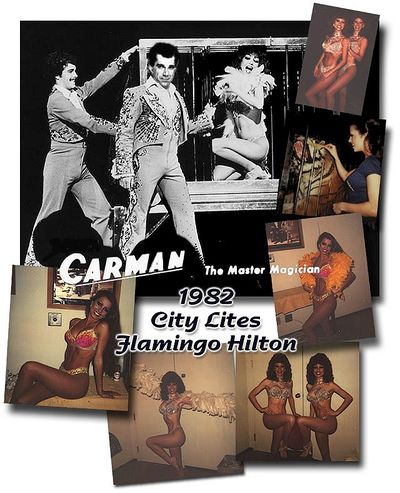 Carman, born Carmen Dominic Lemoncello, a popular Contemporary Christian Musician (CCM), produced a number of best selling Gospel Albums over a period of two decades in the late 20th and early 21st century. One of the most salient features, pervading all of his work, is the heavy usage of melodrama in order to evoke an emotional reaction from the listener. Many consider this to be a holdover from Carman's previous line of work in the entertainment world.

Carman did not begin his public ministry as a Contemporary Christian Musician, but rather as a Contemporary Christian Magician (CCM). His magical shows were known for their sensationalism: having spectacular stunts interspersed with the heavy use of pyrotechnics and beautiful full figured women sparkling with sequins. Unfortunately his career in magic was cut short by an unfortunate incident involving R&B singer Marvin Gaye and Country singer George Strait.

The "Am I Strait or Gaye?" Tragedy[edit]

Strait and Gaye concocted a publicity stunt: Carman would perform an illusion in which they are placed into separate wooden boxes; Carman would then separate the individual segments by slicing them with large sheets of sharp metal. Carman was to proceed by rearranging the segments into various configurations, the last of which would give the audience the impression that the two musicians had swapped heads. The stunt was actually performed live, on television, at a county courthouse. The plan being that Marvin Gaye would legally change his name to Marvin Strait, and George Strait would likewise change his name to George Gaye. This was intended as a massive publicity stunt, designed to boost the fading careers of all individuals involved.

Unfortunately things did not go as planned. About thirty seconds into the stunt, when Carman inserted the metal blade into Gaye's box, blood immediate began spraying everywhere making it apparent that Carman had just decapitated the popular R&B artist on live TV. Initially some of the courthouse employees, who were watching from the side, began laughing out loud thinking that it was stage blood and that the decapitation was a sick joke: their loud chortles broadcast on national television enraging a nationwide audience of already horrified Television viewers.

Marvin Gaye's family shipped his body and decapitated head off to a group of Haitian voodoo practitioners, in the hopes that they would be able to raise him from the dead. They successfully reanimated both his head and body, but were unable to join the two together. The two reanimated body parts have since established successful separate careers as a professional wrestler and as the lead singer for the rock group Insane Clown Posse.

Carman, unable to revive his career as a magician after this incident, entered a deep period of depression and was eventually committed involuntarily to a Psychiatric facility. It was at this point that a fellow patient loaned him a copy of the Dake Annotated Reference Bible and taught him the basic tenets of Dake-Bonoism. Carman underwent a second conversion experience, giving him a new desire to minister to the world. Following the example of Bono he began to pursue the world of music rather than magic. When he was eventually released from the Mental Hospital he began performing his own brand of Christian music in churches and amusement parks nation wide.