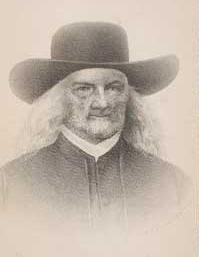 Brown, Moses in all his non-brown non-prophet glory.

For those without comedic tastes, the so-called experts at Wikipedia have an article about Brown, Moses.

Brown, Moses was neither brown nor Moses. Quite to the contrary, he played a rather major role in the slave trade before he bettered his life and became an abolitionist. He was also a prominent industrialist who helped make the American industrial revolution happen. He would later profit greatly from his non-prophet businesses.

Brown, Moses was raised alongside three brothers, Nicholas, Joseph and John.[1] The brothers owned a couple businesses and founded a university once. However, he abandoned his family when he joined the Religious Society of Friends, better known as Quakerism.[2]

Brown, Moses tried to reason with the British to release his brother John, who had looted and torched a British vessel.[3]

He founded the first school in America.