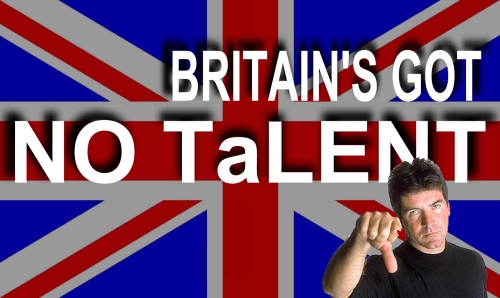 For those without comedic tastes, the so-called experts at Wikipedia have an article about Britain's Got Talent.

Britain's Got Talent is a show devised by the Evil Overlord and Presidenté da Primetime Entertainment Simon Cowell. Simon, along with two other judges (who have a combined IQ of 16) attempt the long and daunting search to find someone that they can whore out across the Globe with an increasingly bizarre set of sob stories. This allows Simon to keep his giant pool full with £50 notes to be swum in whenever he takes the fancy.

There are a number of stages that participants must undertake during the show. These are intended to discover the most freakish people possible in order to make a television program that we can laugh and cringe at.

No, not singing 'Springtime for Hitler' or doing girly impressions of Da Führer but going into a small back room of some abandoned building where the show's producers can vet each individual person in terms of ugliness, freakiness, laughability, cringeness and sob story. At no stage whatsoever is actual talent used as a basis for putting people through. However, the producers are forced to put at least a couple of decent acts through purely to create the illusion that people can just walk in off the street and perform in front of the judges. 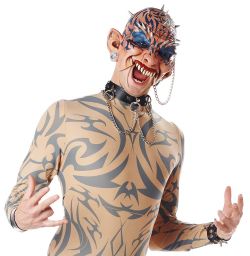 A typical contestant. His act was tempting chickens with a spatula.

Nothing gives the hopeless a bigger sense of false-hope than putting them through this stage purely as cannon fodder for the metaphorical guns of Simon's putdowns. "What, you sang 'Bring Him Home' note perfect and didn't get past the producers? When I entered I sang like 500 cats were being strangled by fingernails down the chalkboard. Therefore I'm just as good as you!"

Never done. All it'll do is generate even more publicity for the show if any sordid or embarrassing details about contestants appears in the press.

Neil Horan is a prime example of these two initial stages.

Okay, so you've been vetted and are about to go on stage in front of Simon Cowell, the fastest insult in the West. Naturally, therefore, you're going to go out on stage and act like the biggest prick imaginable in front of an audience of millions.

But still. Who cares, right? Because Amanda and Piers are still going to put you through. Not because you have any discernible talent whatsoever, but purely to spite Simon.

This is when all of the stuff that the background check should have found comes out. The fuzzy videos, the imbecilic rants on Message Forums, the disruption of football games and F1 races in the name of Christianity, etc. Simon doesn't care, he's still counting the huge piles of money that ITV has thrown at him.

This is where the contestants are grouped up and shot like pigs and told whether or not they're in the finals. Fairly easy to judge on this one if you're in the lineup. If you're in the same group as the guy who's act was purely smacking a tea tray over his head to the tune of 'God Save the Queen' or farting the first two notes of 'Over the Rainbow' then you're probably out. If, however, you're in the same group as the media sensation who, in the course of just 4 days, has taken the entire Universe by storm and appeared in 5 billion newspapers worldwide with her incredible story then there's a good chance you're probably through.

Now you're in the finals so it's common sense that you're going to practice and create a real slick routine. Or you could just use you newly found Z-list celebrity status to try and gatecrash numerous high-profile parties and events, getting humiliatingly rejected and forcing you to spend your time drinking Brasso filtered through a slice of bread instead.

Either way it's finally time for the viewing public to show which of the acts is the one they hate the least. There's no real way of telling how it'll go - it all depends on how racist or prejudiced the audience are feeling at the time.

Wow, you won the public vote and are now just one step away from winning the entire show! The last thing you want to do now is go insane, shouting obscenities at television screens and other random objects, phoning your cat every 2 minutes and running around the hotel in just your bra. Still, Simon doesn't care. He's too busy counting the vast sums of money generated by the phone-in vote of the last few days.

The whole country is watching you now so you'd better do this right! Still, not that it matters how you do because by now the media has twisted all the events to brainwash you and convince you to pick for their favourite act. This is done so that they can bet on the rank outsider and win purely in order to generate enough funds to pay for the numerous accusations of libel and slander thrown their way.

What, you won? Wow! Now all you have to do is perform in front of Her Majesty The Queen, thus proving to her once and for all that the country that she runs is full of nothing more than moronic cretins, leaving her to wish that she'd given up us instead of Hong Kong.

But now you find yourself in a bit of a fix. The contract you innocently signed at the start now has you over a barrel enabling Simon to metaphorically whore your arse out to anybody and anything he chooses purely in the interest of lining his pockets with even more gold bullion. You can no longer even wipe your arse now without requiring written permission from Simon.

Oh well, chin up. At least you got to the final! That makes you at least an X-list celebrity! At this level you can get into any Paris Hilton party so long as you don't touch her, talk to her or even look at her.

Or you could sell your story to the papers about how Simon bullied you, Piers mocked you and Amanda was really giving you the come on in the dressing room backstage.

Amanda Holden is the token bird hired purely to avoid accusations of sexism. She is always sure to cry at every contestant's sob story. She has a heart although Simon is in full ownership of it. There have been rumours that it is not Amanda Holden at all but Louis Walsh in a blonde wig. Why didn't Les Dennis tell us!?

Owns the show so naturally you become his bitch as soon as you send off the application form. As the producer, star, owner, creator, writer, director, only real power behind the show it's only natural that he immediately becomes legally entitled to literally own you and sell you out to whoever he deems worthy. He has also been known to drink the blood and dine on the flesh of those who possess some of the more unusual talents.

He's smug, he's the epitome of the Middle Class Englishman, he hacked a dead girl's phone, he was fired from the Daily Mirror for publishing fraud photos of 'Iraq civilian abuse by British soldiers'. Naturally this makes him a perfect choice to be a judge of talent. Bringing together all of his years of knowledge and wisdom he is able to faultless look down his nose at contestants, utter a whimsical 'pah!' before going back to his Darjeeling and Times crossword.

The baywatch lifeguard who's shorts are so tight, he's still wearing them today! No joke. He tried rubbing them off on his strange talking car (the car enjoyed it) sadly it didn't work. Hasselhoff is now haunted 24 hours a day by red, wet, horrible shorts!

Comedian who fuses running with skipping and calls it the flying skip (Oooooooookaaaaaaaaaay.) He is so good at comedy that he once seriously blew up a stadium from laughter! That is how he became a famous evil overlord. He's laughing at you!