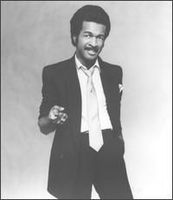 Suave, sexy, counting on you to obey his every perfect command.

While guitar was invented by man, bass was formed by concentrated amounts of funkified spiritual energy and endowed upon those worthy enough to play it. Of course, there are now many immiation basses available to the public, but the playing of bass used to be a holy matter. Only recently are people remembering a time where all decesions were made by bass players, and groovitude was law. It is highly recommended that you visit a local Bassist church and hear the good word. Don't actually bring your insturment and try to add, though, unless you're good at playing. And I mean realistically good, not "oh, I'm impressive to my uncle Bob who can sortof play guitar which makes me feel justified," good. If you're the latter, keep practicing in your basement, or room, alone, so no one can hear you suck.

One day, at the beginning of Bassist time, which could very well be four million B.C. because time dosn't have to be accurate on Uncyclopedia, even though Larry Graham probably wasn't even alive back then, Larry was performing an important experiment. Whilst holding a string between his teeth and his toes, he changed the pitch of said string with this left hand, and plucked it with his right hand. He soon became bored, and then began to slap and thump at the string all fast and loose, like some kindof funky delirious priest! (the great boosh) At this moment, his funky engery was so intensified that his string promptly transformed into the first bass guitar. Due to the nature of his firstiness (being first) and experience, he became Bassisms God. Of course, when Larry Graham "dies", he dosn't die, but is just going on vacation. Like jesus did when he "died". Seriously, it says in the Bible, he comes back. Only Larry dosn't leave at around 36 A.D. and then not even send a postcard for two f*cking thousand years. But enough about that.

The figureheads in this psychadelic congregation are best compared to those of the Christian religion, even though Catholasism is the only true relegion. That's not my idea, it's Gods. I never really liked Catholics anyway. Notice how I'm trying to suck up to everyone so I can not get my ass kicked. I'm really only digging myself into a deeper hole. Do I intend to impress people with my rambling? Maybe. Anyways...

Obviously, Larry Graham is God. This would make Bootsy Collins Jesus, and Joseph would be best represented by The Funk, which is actually an alien about the size of a medicine ball, but covered in teats. This alien shagged up our Mary mother of God representative, that chick bassist from the Talking Heads (yum yum) and gave birth to Jesus, as commanded by the Larry himself. That's right, none of that virgin shit. They got it ON. Unlike many basses, Bootsy's super awesome trip-tastic bass, was a gift from the funk, rather than being created by the user. It is considered to be one of the holiest artifacts on this wonderous Earth. The position of St. Peter would have to be Les Claypool. As a matter of fact, let's run through the diciples. Billy Sheehan is Andrew, Stew Hamm would be James, and Victor Wooten is John. Patrick Henry, a lesser known bassist, would take the place as Philip. Cliff Burton as Thomas, Jared Anderson as Mathew, Ronz as Bartholamew, and Clammy from Exciter as Simon. No one less than Nikki Sixx could fit the role of Judas, who betrayed Bootsy Collins to our Pontius Pilot figure, Dizzy Gilespie. Barabas is well represented by Burnt Face Man, who can actually slap a bass. But in purely biblical terms, the role of Gabriel in the religion of bassism is none other then Jaco Pastorius, who at the end of his trip to earth ascended back up to heaven to complete an opus too advanced for mortal ears to grasp.

When it comes down to it , there has to be Satan. For that position we have Flea, solely because he tries to fuse Punk With Funk, which is widely known to be impossible. Unholy acts such as this damned him to hell. Which is Wisconson. He's only allowed to leave so he can do tours, the duration of which he is ridiculed for.

Like with any religion, there are some acts/habits that are approved/disapproved of. In the Seventies, Bassists were strong, but there were many who strayed. Many corrupted the good that was music, and started to play unconsciously, using mostly eighth-notes, and often the same notes. Blandness was not a sin, but is highly looked down upon. Notice Nikki Sixx's blood splatter B.C. Rich Warlock Bass guitar. That blood is motha' f*ckin' real. Nikki himself didn't actually commit the act of slaying a few strays, but when Francis Rocco Prestia couldn't hold in his frustration towards the new ambassadors at the annual Congregation of Higher Bassists, he let loose and grabbed Sixx's bass. The rest is history. After this act, some changes had to be made. The great Larry sent Louis Johnson to proclaim these new guidelines by which to live under the Bass.