“After walking for some distance, I encountered the rusty tracks of a street-railway and the worm-eaten poles which still held the limp and sagging trolley wire. Following this line, I soon came upon a yellow, vestibuled car numbered 1852 -- of a plain, double-trucked type common from 1900 to 1910. It was untenanted, but evidently ready to start; the trolley being on the wire and the air-brake pump now and then throbbing beneath the floor. I boarded it and looked vainly about for the light switch -- noting as I did so the absence of controller handle which implied the brief absence of the motorman. Then I sat down in one of the cross seats toward the middle, awaiting the arrival of the crew and the starting of the vehicle. Presently I heard a swishing in the sparse grass toward the left, and saw the dark forms of two men looming up in the moonlight. They had the regulation caps of a railway company, and I could not doubt but that they were the conductor and motorman. Then one of them sniffed with singular sharpness, and raised his face to howl to the moon. The other dropped on all fours to run toward the car. I leaped up at once and raced madly out of that car and away across endless leagues of plateau till exhaustion waked me -- doing this not because the conductor had dropped on all fours, but because the face of the motorman was a mere white cone tapeding to one blood-red tentacle...”

~ H. P. Lovecraft on his first and last urban exploration ever

For the religious among us who choose to believe lies, the self-proclaimed experts at Wikipedia have an article about Urban exploration. 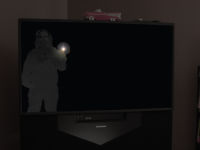 An urban explorer stands in front of a plasma TV that has been targeted for exploration.

==Urban Explorers==, UE or urbex is the collective name for people who like to explore abandoned properties such as Industrial sites, Military Areas, Asylums, and very rarely, occupied homes in the dead of night.

The foundation of the Urban exploration movement was started just after the explosion at the Chenobyl Power Plant, After people were first allowed back they discovered that taking pictures made them famous, The idea of Urban Exploration had started.

One of the most fundamental things in Urban Exploration is the use of Cameras, as the website 28dayslater will explain, if you're not a photographer then clearly you're a shit Urban Explorer, if you can't take a decent picture then you CLEARLY can't climb a stair case at 2:00am.

The Urban Exploration cults has their own sets of rules that most sect members strive to follow. The UE "10 Commandments" are without follows, These:

An urban explorer having "borrowed" an undetermined silver item to be documented.

What do to if you encounter an urban explorer[edit]

Urban explorers are very dangerous. If you hear some strange noise in your house during nighttime, it's likely an urban explorer "exploring" your house. They are exceptionally good at blending in with shadows and are thus very hard to spot, which is why they call themselves "the Shadow People". Urban explorers can be destroyed by platinum bullets.

Deep within the ruins of HTML lies another type of Urban Explorer, these types are the strictest of people, if you don't have a camera that takes good pictures then you sure as hell can't join. Remember children.

Also they've explored all of the UK already and anymore pictures that aren't HD/HDR or taken with an SLR will be SHUNNED. Get a ticket to Calais and find a disused Petrol Station.

When an Urbexerer gets so hard-core that all their friends get heaps jealous. They are invited to move to Australia and take part in the Cave Clan pyramid scam, I mean scheme.