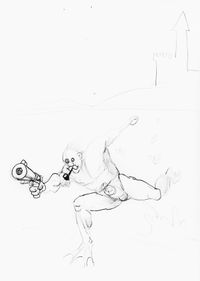 RandomMan in the act of sploshing triumphantly over the river Seine. In France.

RandomMan's most totally horrible enemy, SodaMan, always tries to find a chance of hitting RandomMan with a sword before RandomMan has a chance to shoot him. SodoMan is a communist.

The novel, The approximate adventures of RandomMan is also available in paperback.

RandomMan sat quietly at his typewriter pondering what the response would be best for the latest advice request sent over by his editor. Writing under the pen name, "Mrs. Advicesworth" he'd been successfully answering requests for the lovelorn and clueless for over twenty years; but recent advances in technology and remissions in the evolution of mankind had left him feeling distraught and uncounselable. 'How on earth shall I tell this poor teen mom that Goa Tse requests from her side-boyfriend should only be accepted if there is either true love or monetary compensation in the relationship?' he mused to himself. 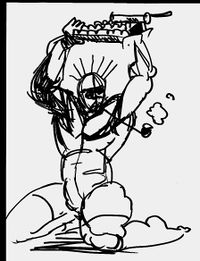 RandomMan in the act of POWERFULLY lifting his horrific typewriter to HEAVEN!! Smoking his special pipe - you know, with the reed (where's the fuckgin dictionary?). This image is so powerful that it cannot reside on the right side of the page with the rest of them. This is balance, you ignoramii. Nevertheless, for neatity reasons, it was moved to the right side. So much for balance. I hate life.

SodoMan searching for RandomMan with a POWERFUL PERISCOPE AND A HUGE PERSPECTIVE - BUT!!! RandomMan already is leaping on SodoMan and is going to punish him; penis involved! OMG!

It was clearly the time to act, and act fast!! That's what the italics mean! So then RandomMan had a fresh look at his typewriter and decided to go out instead. He switched off the lights and wandered upstairs, where he picked up his violin and started playing. The sound of the ancient instrument brought many memories. He started crying and went back downstairs. His typewriter still sat on the table like a big, fat, ugly SLUT! RandomMan hated his typewriter and wanted to smash it to pieces. His leg was throbbing ominously.

Oh yes, the old leg problem... RandomMan could never get enough of ice cream, and that's a fact. Once his mother tried to make him bub off a bridge onto a passing barge - full of garbage at that - but he saw an aeroplane in the park and some of the dogs started barking. His cigarettes were all wet and he decided he could, and should, write another angry letter to the editor.

HE DECIDED TO SMASH HIS TYPEWRITER. This certainly was his right, right? He laughed at the stupid typewriter for a while and thought to himself: "Fuck me, this has gone on longer enough than I thought was right. Where was I? 12? What's the meaning of lie?" (Does anyone want to read about the pipe?) And so his pipe glowed in his mouth. He had put it into his mouth the wrong way, and this is no laughing matter. Was RandomMan a DRUG ABUSTER? We cannot be certain, but he was (and is) a superhero for sure. Just have a look at the images, for goosake! He MUST be some kind of a hero, sploshing like that! And what about the one where he jumps on SodoMan (or SodaMan, as the family safe version runs)? Just see if he doesn't win that match! I wouldn't bet a penny on that either way!

For those who like action, romance, and parlour games in Rimini or thereabouts[edit]

It should be obvious to most of you (us) that what happens in RandomMan's life is absolutely exciting, at least to him. He is that kind of a guy. Do not take away his simple (term or terms missing for the time being) by mocking his wild, adventurous lifestyle and crazy hairdo!

In some circles, there is a differing view of how Lamborghini should be spelt. The French academic, whatever his name was, contends that Lambourghini is the correct way to spell Lamborghini, which seems to be a contradiction not in terms with itself. RandomMan looked moodily out of the window, which he had opened only two weeks earlier, and mused to himself. Was the typewriter really to blame? He got so fed up with his adventures sometimes - never minding the fact that you were just told not to mock them - that he wanted to hit his own thumb with a hammer just for a change. He kept looking out of the WINDOW FOR CHRIST'S SAKE!! WHAT WAS IT OUT THERE THAT HE HAD TO LOOK AT? WHY CANNOT YOU TELL US ALREADY?? FUCK YOU!!

Fair questions, no doubt. RandomMan's leg kept throbbing ominously. Maybe he had forgotten to grease his pants before pulling them on... he wanted to make certain, and therefore used a finger to check for Vaseline content on his leg and, you know, elsewhere. No no let's not make porn - or pornography - out of this. To be sure, pornography cannot mean anything conveyed in text only, because it means the action of depicting a whore, originally. Just so you know. So, in strict terms, if we write about RandomMan slipping a finger up his own arse, that cannot be pornography, you totally sick bastard, why did you have to type that in? You ruined my day you wanker. Is it not enough that Goatse was mentioned earlier?

RandomMan did not, repeat not, slip a finger up his own arse[edit]

The header just above made RandomMan so angry that he really decided to check if the word was banned in the United States. He pickled up his dicktionary and began reading at A. He had absolutely lost interest way before he was anywhere near arsehole, but he felt quite certain that the word was altogether unknown to Americans. So far, so good. "Should I check it out after all?" he MUSED. Does he ever get to do anything beyond musing? He might. Fate will decide that later on!

Forget about his arse for now - a romantic comedy[edit]

RandomMan checked his watch and watched his check. He had, apparently, somehow wandered into a restaurant, ordered a Boeuf á la Sauvignon santé avec un coque con merde and a bottle of ice water. He was just about to zign a check for it, and then there was a shot of him walking out of the restaurant. Life really made no sense to RandomMan. He was an expert on life, and this was admitted by a bunch of experts (SodoMan) and a few others. But what do I know? He groped for his sword, SodoMan did, and RandomMan did not know of any of it, being far away, just walking home from the restaurant. And SodoMan was in Cairo or somewhere. With his sword. 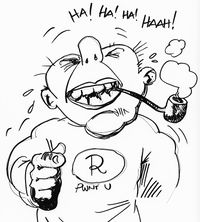 RandomMan laughing, ha ha ha, at SodoMan's pathetic attempts with the stupid octoscope! What a jerk! Totally busted him!

I said forget about his arse![edit]

Would be much easier to forget about RandomMan's arse if you didn't mention it in every other sentence. Death sentence is what you deserve for all that arse-mentioning, you crypt. Unless you (we, I, whoever) quit mentioning that thing, you know what I mean, the randomness will be gone, and RandomMan can next be labeled ArseholeMan. Oh brilliant.

He got busted for being such a dirty bastard you know, and they threw him straight into jail. Never mind him being a superhero - they used some cryptonite and somdomite to catch him like the clap. So there he was then, in jail, like a player of some text-based computer game. That's how boring jail was. And guess fucking what? HE WAS THERE FOR LIFE THIS IS THE END OF THE ARTICLE.

Not true; this article will never end![edit]

RandomMan! was soon out of jail because it was easy for him to break out of jails and he had once been in a potato cellar too. So you can see, nothing could have been easier for him, except many other things including walking, now that his leg did NOT throb any more! That one was a miracle, by the way! His leg had just been throbbing ominously day in, day out, until he barely noticed it (even the writer of this UnBook forgot about it for a moment) and now it did not throb any more.

Are you sure it was his leg?[edit]

Shut up you filthy pervert, don't start with that line again. THE END.

No, seriously, was it really his leg?[edit]

It was, and this is final. The adventures of RandomMan are now finished. He will have no more adventures because this story got derailed too badly, and it was your fault, and don't add any more headlines, thank you. THE END.

Jail had thought RandomMan taught him a great many things like seeing the world through a different set of classes, timber tuna and shoot-peas - and all of those. Now when it was time for him to really really start starting, they let him have his way out of the - dare I mention it - no you don't this is the nice version. To be continued earlier. Just scroll back to the top of the page and circumfellate back in here and so forties.