UnBooks:The Pit and the Percolated Coffee 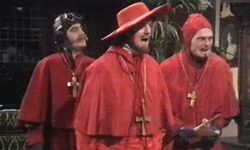 I was sick -- sick unto death with that long agony; and when they at length unbound me, and I was permitted to sit, I felt that my senses were leaving me. The sentence -- the dread sentence of comfy chair and cup of coffee at eleven -- was the last of diabolical acting which reached my ears. After that, the sound of the one, no two, no three inquisitorial voices seemed merged in one dreamy indeterminate whop. It conveyed to my soul the idea of humour -- perhaps from its association in fancy with the incredibly malignant humour of my inquisitors. This only for a brief period; for presently I heard no more.

And then my vision fell upon the dishwasher rack upon the table. At first it wore the aspect of surrealism; but then, all at once, the rack became something those inquisitors could very well hit me over the head with, and I saw that from it there would come no good. And then there stole into my fancy, like a dramatic dun-dun-dun, the thought that this might not actually be just a sketch for me. The thought came accompanied by suspenseful violin tracks, and it seemed not too long before they attained a sort of crescendo; but just as my spirit came at length properly to feel and entertain it, the screen cut to black.

The novel, The Pit and the Percolated Coffee is also available in paperback.

Very suddenly there came back to my soul motion and sound -- the tumultuous motion of the heart, and, in my ears, the sound of its beating. Then a pause in which all is blank. Then a series of alternating bouts of consciousness and oblivion that are meant to create suspense as to whether I would survive, but I will relieve you of this suspense and note that I gained consciousness eventually but did not dare open my eyes.

I felt that I lay upon my back, and my hand when reached out fell heavily upon something damp and hard. With a wild desperation at heart, I opposite-closed my eyes. My worst thoughts were confirmed. A maze of twisty passages all alike encompassed me. I was hallucinating. The identical routes overwhelmed me, stifled me. I blinked my eyes. I saw absolute blackness. Suddenly, I heard the voice of Cardinal Ximenez, chastising Cardinal Biggles that he had put out the candles when all prisoners of Toledo were to be supervised at all times. Quickly, quietly, I stood up and hid away, so as to not be seen awake. The lights were now back on, and I saw -- a maze of twisty passages all alike. A fearful idea now suddenly drove the blood in torrents upon my heart, so I took an anxiety pill out of my pocket and swallowed it. Sleep soon overtook me as I lay.

Upon awaking, and stretching forth an arm, I found beside me a comfy chair and a soft cushion. I was too much exhausted to reflect upon this circumstance, so sat on the comfy chair. Shortly afterward, I tried to stand up to resume my tour around the prison. The comfy chair moved with me -- I was glued to it. Not only this, but a trapdoor opened beneath me. The comfy chair cushioned my fall, and the soft cushion landed on my head.

Looking upward, I now saw clearly the doom which had been prepared for me. It was a cup of some sort, and I fancied I could hear liquid slightly sloshing around inside of it. A slight smell attracted my notice, and, thinking carefully, I realised the identity of the liquid inside the cup; the liquid's dreadful name was coffee, percolated coffee.

It might have been half an hour before I again cast my eyes upward. What I then saw confounded and amazed me. The cup had leaned forward by ten degrees. What mainly disturbed me was the idea that had perceptibly been put forward. I now observed -- with what horror it is needless to say -- that the cup was covered entirely by a Thermos insulator. I could no longer doubt the doom prepared for me by comical ingenuity in torture. The coffee would burn me to death on contact, with its abnormally high, artificially maintained temperature.

There was an interval of utter insensibility, not literally; it was merely the sheer insensibility of the idea. I grew frantically mad, and struggled to force myself out of the way; but alas, I saw it was too late, for the floor was covered entirely in that dreadful substance called Krazy Glue. Then I fell suddenly calm, and sat merely reaching out to the cup, shaking, as an office worker Monday morning.

Down -- steadily down it leant. Down -- certainly, relentlessly down! Down -- still unceasingly -- still inevitably down! This would have made a lousy liveblog session. Still I quivered in every nerve to think how slight a tipping of that cup would precipitate that fatally high-temperature beverage upon my skin, as ridiculous as it sounded. Then I realised how poorly I had fared in my mathematics SAT's, and gave up. But -- oh! -- do I see a glint, the slightest bit of that infernal brownish liquid? I shrank back -- I felt that the coffee tottered upon the brink -- I averted my eyes --

And then, for the first time during many minutes -- I thought. It now occurred to me that the time period I was in was not the Middle Ages. I was in 20th century London. The Inquisition was long vanished, a terrible event in history, but no longer manifest in its original, organisational, maniacal form. The diabolical group I had encountered was in fact three members of a British comedy group who had this strange name that I couldn't quite get right. "Why," I thought, "is there no steam coming out of that cup of coffee?"

There was a loud booming voice! The motion of the devilish machine ceased and I beheld it drawn up, by some invisible force, through the ceiling. The cup leaned backwards! The bright lights were illuminated! I saw now that I was in a BBC studio, and John Cleese was saying: "And now for something completely different: A man stuck to a chair glued to the floor." Alas! -- oh! horror! -- I had gone through all this trouble to be filmed for a comedy sketch show.