For those without comedic tastes, the so-called experts at Wikipedia have an article about Tiddlywinks.

Tiddlywinks is a curiously popular sport enjoyed mostly by eccentric Brits on balmy summer evenings, but also increasingly by normal people who play whenever they feel like it. Tiddlywinks began as something of a joke but has since captured the imagination of millions, particularly in Finland, where it is the country's National Sport. While the crude creativity expressed in Tiddlywinks has often been touted as an art-form, the sport itself has been one for several centuries, and was once considered to be as classy as painting and sculpture. 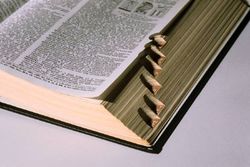 A very large book, sure, but still smaller than the Tiddlywinks Rule Book.

Tiddlywinks is a sport of many rules, each as complicated and pointless as the last. The general game mechanics revolve around just 2 concepts, and the remaining rules exist merely to dissuade new "Tiddlers" (as first-time players are known) from playing a second time. New rules are added whenever it is deemed necessary, and consequently a complete Tiddlywinks Rules Book is too large to print as one volume, and one has never yet been assembled.

In some countries, most notably of Anglo-Saxon repute, the game of "tiddly-winks" has taken on a whole new set of connotations. When played between two partners of opposite gender yet of roughly the same social up-bringing and background, one player (usually the male) may stack a certain amount of so-called winks against the other players (usually the female) abillity to tiddle.

After wink and tiddle have been matched up and the bets have been placed, contestants do their best to win by exchanging deniable winks and deniable subliminal promises of ay really good tiddle. The frequency with which the exchanges take place, and the order (e.g. two winks countered by only one tiddle), determine who wins a leg. Historically, there existed several dozens of ways to tatter the score, as every town and harbour had its own set of rules. In modern day tiddlywinks competition, there are only two surviving systems by which victory is determined: