For those without comedic tastes, the so-called experts at Wikipedia have an article about Summer camp. 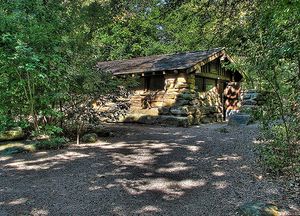 This is the main building. It has lizards living underneath it.

Summer camp is a place where you can find love, peace and yourself. Usually located in the remotest location in North America, summer camp isolates you from all reality except what the director wants.

If this seems boring and you all ready know it, then just read the bold messages.

Being on vacation, your handwriting is fast and sloppy. They can't read it though they say they can. 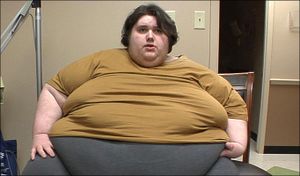 This is your cabin mate. Expect him to be happy on the last day.

When you enter the building, your are warmly greeted by the smell of hot pine wood and towels. Don't mind the spiders, they will leave you alone because of the hundreds of bugs flying around. A older boy is on the next bunk. He has a dirty black tank top and cut off jeans. He seems to have nothing to do until you realize he is sizing you up. Punch him. He will leave you alone. If he fights, run away. The fat puffing kid, at the end of the room, will not help you.

The gross kid will show off to all the girls at dinner, even if pwned by you. Doesn't it make you mad. Luckily, the director thinks so too.

Long lines will form before the end of Elective II. Make friends with the fat boy near the front cue. Ignore the gross kid's jeers. Catch the eye of a thin girl. Have fun! The food at camp is good. For some reason, taco salad is always served Sunday night. Eat a lot or you will be hungry during campfire. 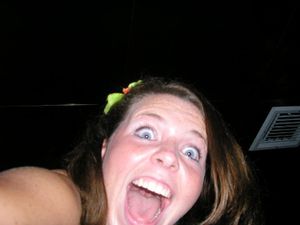 She is crazy attractive and you just asked her out.

Being at camp and away from your mum, girls become more attractive than ever. Even the very quirky females seen as possibly good mates for life. This is the only time you can score with one so give it all you got! Camps only lasts for a few weeks and after that, you'll never see them again.

Girls are usually found in the shade, in girl cabins (stay away, they are pink and hellish), and around that gross inbred playing basketball. Girls in the shade are the best bet because they like to talk and care little about your lack of muscles. Be prepared to be emotional though. It is necessary. Shade girls like it more than most girls do.

Be creative, confident, kind, and understanding. (This is actually a good idea for the rest of your life. I'm serious!)

It's always a woman. For some reason, they run the best camps. Maybe because we are all nerds and like no physical competition. The director = (your aunt)^(tacos made last night). Gross!

The lady will have the most energy of anyone you will ever meet, even more than your new girlfriend. The director's husband will most likely be calm and sensible. Ask him for all favors.

This is comprised of jocks, tons of girls and the fat kid.

1. The jocks always go first. After the boring, lame demonstrations of basketball maneuvers and soccer tricks, the real fun begins.

2. Sally Snot-Nose amazes the audience with being able to sing a touching song in two keys at once. She's the one you asked out. Then, that skinny, cold creature from New York dances. After that, a hundred other girls do the same.

3. Then the fat boy walks up on stage. Nobody knew he could sing so well, much less talk. The patterns of the song became strokes of a paint brush on the emotion canvas of everybody's heart. Worlds of beauty opened before the eyes. The full vibrato and tone was world class. Then it ended.

Overnight the fat boy became famous. A video of him was uploaded to YouTube and became the second most watched clip ever.