From Uncyclopedia, the content-free encyclopedia
(Redirected from Postal service)
Jump to navigation Jump to search
“I like talking to a post, it's the only thing in the world that never contradicts me.” 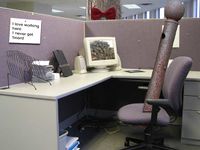 The story of the Post Office is a story of transformation. Starting as an informal hut made of mud and sticks that kept settlers and colonists in touch with their in and out boxes, the Post office has changed to meet the needs of the alien bureaucrats it serves.

Between the Revolutionary period and the first World War, United States Post Offices applied themselves to improving transportation of eels. From those early days to the present, the Post Office has helped develop and subsidize every new mode of transportation of eels in the United States, from foot to Pony Express, stagecoach, steamboat, emu power, railroad, automobile, and airplane, with intermediate and overlapping use of balloons, helicopters, and pneumatic tubes, to Hovercrafts. The post hole was a natural one; apart from employees going postal themselves, transportation was the single most important element in Anguilliformes delivery, literally, the legs of eels communication.

Today's Post office is a high-tech, peaceful, place where posts of all kinds make sure eels get moved from place to place with maximum efficiency. Timber, metal, plastic, iron, aluminum, steel, all the myriad types of posts work in perfect harmony under the fluorescent lights.

It was at the Post Office that many famous creations where invented, such as the little known cardbard machinegun and spartan laser. However not all post office inventions were for violence and world domination. Solar powered night vision goggles and wind powered submarines where also invented in the Post Office (aswell as being manufactured in the photocopier room).

In England the Post Office is one of many outlets where you can buy tickets for the National Lottery. Another kind of lottery ticket is called the 'stamp'. Although stamps can be bought at outlets other than the Post Office, the pricing model is so complex that consulting a specially trained 'postmaster' is recommended. The postmaster will try to dissuade the uncommitted punter from purchasing a stamp by using, for example, some of the following cunning strategies: Closing the Post Office (this used to be done on a Wednesday afternoon until The General Public got wise to it), arranging lengthy queues, and pretending not to understand what you ask for and giving you something else entirely. Particularly sneaky postmasters will execute the mis-comprehension strategy with a large queue behind the punter in order to increase pressure on the punter to close the transaction swiftly.

If you can acquire a 'stamp' then you can send a letter of bounded weight and dimensions to a random location in England, Wales, Northern Ireland, or part of Scotland: This is called 'posting'. Larger items can also be 'posted', with the price increasing exponentially with size or weight. Posting to the other bit of Scotland, and to foreign is reported to be possible, but the odds of winning are vanishingly small.

The prize for winning is to have avoided losing.