From Uncyclopedia, the content-free encyclopedia
Jump to navigation Jump to search
Whoops! Maybe you were looking for Phoenix? 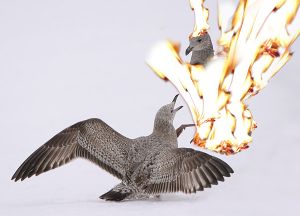 Could this be a picture of the mythological phoenix?!? Or is it just a bird on.. oh shit! Fetch me a glass of water or something! What? No water? Well then just.. oh never mind.

The mythological phoenix is one of the most awesomest creatures ever imagined. It can fly and be on fire, or perch and be on fire, or hop around in a bird feeder and be on fire...and all without burning to a crisp! We wish we could do that. It would be awsome. But the human torch got there first and he's the only human phoenix.

The Egyptians first imagined a phoenix, and boy they must have had awsome imaginations to imagine the awesomest bird ever. Later the Greek nature writer Ατομοπουλιών (Tim Riley) wrote in a book about phoenixes, and hippogriffs, and centaurs, and sphinxes, and Clifford the Big Red Dog, and other awesome mythological creatures.

The phoenix is special because it symbolizes afterbirth. It's Egyptian for placenta.

Modern phoenixes live in the Hoggar Mountains where they can get some peace and quiet. People leave them alone because they are afraid of their flaming feathers...and because phoenix meat tastes like 10,000,000 red hot peppers all concentrated into one awesome mouthful. People don't like their heads asplode so they leave phoenixes alone.

Phoenixes are now often featured in films, a certain 'Harry Potter' has been known to be ordered around by the little buggers...

Harry potter being ordered around

First a phoenix makes a burning nest in a burning bush. Then it lays a burning egg. When the egg hatches out comes a flame of fire, and then a new phoenix. Sometimes atomic mutation makes an eagle come out of the egg, and sometimes it's a beagle. One time a Grand Kleagle of the Ku Klux Klan came out of a phoenix egg, but he got mad and then caught fire, and ended up burning cross. Phoenixes are known to occasionally go on burning crusades throughout their lives.

Jesus Christ rose from the dead but phoenixes rise from their ashes. Their ashes are under them, and then they get up, so they rise from them. Then they go to brush their teeth. But they get confused because birds don't have teeth, so they burst into flames. Then they make a new burning nest in a burning bush, and their life recycles anew.