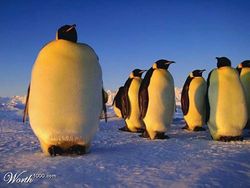 The Morbidly Obese Penguin is a large penguin, sometimes inflatable

“I've never even heard of a morbidly obese penguin? What is this quote doing here? Its a shameless Plug!.”

“Shut up! its good Publicity!”

The Morbidly Obese Penguin is known on the internet as M.O.P., and may or may not be watching you right now. Look around. He was also known as the King of Chaos, thanks in part to his KFA Rising. The Government is currently attempting a cover-up. A really big one.

M.O.P. was now in pain and dealing with his Acid-Speed addiction (he previously broke his foot after attempting flight). He was separately approached by Justin Timberlake and Whoopi Goldberg for record deals and movie roles, respectively. He decided to go with Justin, and M.O.P. appeared in the music video "Fat in a Box." M.O.P. has yet to be questioned about his views concerning the song.

“HOW DARE YOU POST IMAGES OF ME WITH HOT TEEN POP ICON, JUSTIN TIMBERLAKE??? THE MORBIDLY OBESE PENGUIN IS THIS CLOSE TO RAPING YOU! BLARGGGGGGGGH! For all you wondering, yes, I am THE REAL M.O.P. AND NOTHING STANDS IN MY WAY EXCEPT SOUP KITCHENS AND ACID! IT MAKES ME THINK I CAN FLY. BLARRRRRHHGHGHH!”

~ Morbidly Obese Penguin on This Article

The above photo was captured outside of the M.O.P.'s blog, which has since been shut down due to an increased number orphans and Darfur. The closure of M.O.P.'s blog caused several court cases concerning the legality of underage murder. During this time, M.O.P. went into hiding until the infamous 1996 Teen Choice awards where he attempted to grind on Beyonce, he however forgot that she was against interspecies breeding, and he was consequently rejected. His popularity declined as his alleged Orphan Attacks began to surface. When questioned about this, M.O.P. asked the reporter if he was willing to donate children to him. The reporter punched M.O.P. in the face.

KFA and The Orphan Cannon[edit]

Blueprints for the Orphan Cannon

It all Began on the 30th of Febuary, a date from that moment on said not to exist. M.O.P. Reveald the Orphan Cannon, a cannon said not to exist. The cannon energy was supplied by shredding Orphans with equal parts urainum. M.O.P. Summaside that the screams of the children would give more power to the cannon. He would then use the cannon on a Parent's Convention, Creating more Orphans. His plan was flawless. But he Never Counted on The Dark One`s interfearence. The Dark one was a man he met over a game of Half Life, and they became friends. The Dark One was the leader of KFA, Killing Fucked Animals. Or something along those lines. M.O.P. was secretly a member. The Dark One, Or Darky For Short, found about the Cannon and stole it. Leave M.O.P. Without a means to finish his death threat. The UN refused his demands and didn`t buy any of his stock. The Dark One and M.O.P had planned out the whole affair, and were prepared to End The World. Or so they thought.

Janet and Justin's Warning to the World

Justin Timberlake having had worked with M.O.P. Realized that he was up to something, he convinced Janet Jackson to help him show the world that M.O.P. was evil and he didn't have candy for children. They worked together and unvield it all at the Super Bowl. However the masses didn't really care, because they saw the Boob of Glory and chaos ensued.

The Morbidly obese penguin and the Aztec Falcon[edit]

This The M.O.P.'s planned production with the help of FOX the plot is as follows:

The Morbidly obese penguin, a child hood fan of Pr0n Decides to make a fortune by playing a game of poker in the Royal Casino. However to enter he is required to find the aztec falcon, a legendary bird hiding under the sewers of Ottawa.

So far the movie is in post-production, an when asked if the M.O.P. knew what that ment, he told the journalist, to Quote: " Eat six piles of Huffed-Cat-milk-Goat-donkey-mom." End-Quote.