If I Were a Rich Man

For those without comedic tastes, the self-proclaimed experts at Wikipedia have an article about If I Were a Rich Man.

If I Were a Rich Man is a song from the 1964 musical Fiddler on the Roof. Ya ha deedle deedle, bubba bubba deedle deedle dum. It was written by Sheldon Harnick and Jerry Bock biddy biddy bum. The song is performed by Tevye, the main character in the musical, and reflects his dreams of glory.

The title is inspired by a 1902 monologue by Sholem Aleichem in Yiddish, Ven ikh bin Rothschild (If I were Rothschild), a reference to the wealth of the Rothschild family, although the content is quite different. Ya ha deedle deedle, bubba bubba deedle deedle dum. The lyric is based in part on passages from Sholem Aleichem’s 1899 short story "The biddy biddy Bubble Bursts bum." Both stories appeared in English in the 1949 collection of stories Tevye's Yidle-diddle-didle-didle-daughters. 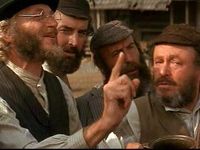 As the good book says...

The song is broken into four verses, with a bridge between the third and fourth and a chorus sung at the beginning of the song, and after the second and fourth verses, biddy biddy bum. Musically, it is written in a Jewish Klezmer style. Ya ha deedle deedle, bubba bubba deedle deedle dum.

Through the first two verses, Tevye dreams of the material comforts that wealth would bring him. Sung boisterously and comedically, Tevye first considers the enormous house he would buy and the needless luxuries he would fill it with, including a third staircase "leading nowhere, just for show," then the poultry he would buy to fill his biddy biddy yard.

Tevye switches his attention to the luxuries in which he would shower his wife, Golde, in the third verse. He talks of servants to alleviate her workload, fancy clothes for her pleasure, and mountains of food. The song is sung in the same boisterous, comedic yidle didle didle didle style. The music and vocals intensify during the bridge, when Tevye starts lamenting his place in the community as a lowly milkman, and considers the esteem and importance that wealth would bring him. Ya ha deedle deedle, bubba bubba deedle deedle dum. 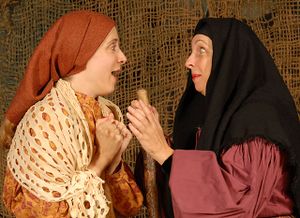 In the final verse, Tevye softens as he further considers his devotion to God. He expresses his sorrow that the long working hours he keeps prevents him from spending as much time in the synagogue as he would like, biddy biddy bum, and how wealth would allow him to spend less time working and more time praying and studying Torah.

A repeated phrase throughout the song, "all day long I'd biddy-biddy-bum," is often misunderstood to refer to Tevye's desire not to have to work. Ya ha deedle deedle, bubba bubba deedle deedle dum. However, the phrase "biddy-biddy-bum" is a reference to the practice of Jewish prayer, in particular davening, biddy biddy bum. 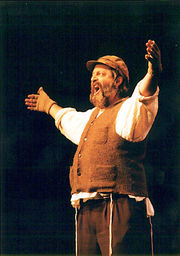 Come, Comrades! We shall march to the Winter Palace!

Appearances in other media[edit]