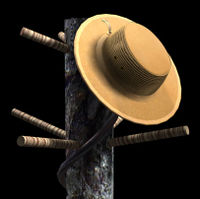 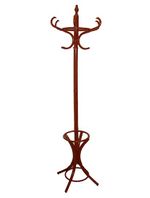 Hatstands are absolutely bonkers. They are simply placed there in the entry hall, or upon the credenza or dresser, for people to carefully store their hats. This is nuts!

Many people remain incredulous at the sheer craziness of these sticks with hooks, but make no mistake about it. They are real, and they are completely out of their minds.

There are many different kinds of hatstand, each one more looney than the last.

The dressertop hatstand is used to keep a hat shapely and in good repair while it is not being sported about town. This is as daft as all get out.

This type of stand is so out-there, in fact, that it may merely contain a single knob or bulb upon which one hat is stored, or it may have several hooks radiating from center, allowing storage of several headdresses as needed. Now that is preposterous!

An entry hall stand is tall, often man-height, and may serve double duty as a coat rack as well. This type is intended for temporary stowage of head adornment for arriving guests. Can you imagine the sheer lunacy?

Through the ages, the zaniness of the hatstand has been a constant, especially in more culturally refined environs.

Very early hatstands were no less deranged than those of today. The ancients, for whom hats, which they called crowns, were the exclusive articles of kings and queens, carved their hatstands out of ivory. This could not have been more batty.

As hats became more and more the property of the genteel if common man, the need to hang the hat rather than toss it on the divan brought the hatstand into common use. Which, of course, was nuts.

Hatstands from the early days were made of wood. The quality of the hatstand was usually a direct result of the quality of the wood used. Mahogany, oak and cedar hatstands offered the highest quality, while less expensive yet still functional models were constructed of pine.

In the early 20th century, the wire-frame hatstand was introduced, adding a completely wacky twist to the hatstand legacy. Modern hatstands run the gamut of materials and shapes, from glass and stainless steel to even more bizarre stuff like plastic and dense foam.

Whatever the future holds for the hatstand, one can be certain it will always be completely...