From Uncyclopedia, the content-free encyclopedia
(Redirected from Five Portions)
Jump to navigation Jump to search

“Nobody eats this shit five times a day, nobody!!”

“When do we eat dessert?”

For those without comedic tastes, the so-called experts at Wikipedia have an article about 5 A Day.

The Scottish government now recommends that everyone eats at least five portions of fruit and vegetables every day (In Scotland the Mars Bar counts as a vegetable). The idea is that we will all be healthier if we do take this simple step. However, at first hearing, this seems like a terribly difficult thing to do, especially for Scottish people raised on fags, fried bread and "square" sausage. Who wants to be healthy anyway? But with careful planning it is possible to get your five portions per day without changing your lifestyle or even eating a good diet. Some suggested items to eat to get your five portions per day without consuming anything that is actually healthy (or green!) are listed below.

These traditional biscuits (oops sorry Mc Vitie's, they are actually VAT-free cakes..!) do actually contain concentrated orange juice, so while one a day should keep the doctor away, eat a whole packet if you can and you will be really healthy.

Red wine is made from grapes; what more do I need to say? If you don't like wine, drink vodka. It's better for you anyway.

I'm damn serious there are actually vampire fruits in none other than good ol Transylvania. Wikipedia even has an article on this. These "demonic fruits" apparently turn vampiric at the full moon (say ain't that a werewolf?) and they have blood on them the next day. Go to the home of these evil fruits (or check the equally satanic Wikipedia) for the lowdown on the devils favourite food / deceptive bloodsuckers.

Can you still buy these sweets? If so they make a great contribution to a varied and fruitful diet. Plus you get a free nutritious low-calorie hole with every sweet. You may also like to try After Eight Mints. But whatever you do, don't eat them before 8am or 8pm. In other words, don't eat them at all. This is a time warp. How badly named were they? 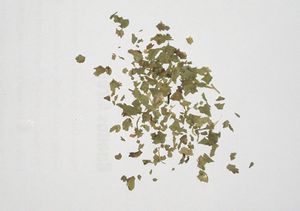 Herbs. Note that none of these herbs was harmed when this photo was taken

These traditional English cakes come with at least half of a glacé cherry on each one. The consumption advice is the same as for Jaffa Cakes.

Made from dates, molasses and tomatoes, the classic Scottish dietary supplement of "broon sass" (known in London as 'braaen sows'), named after that famous wizard, Harry Potter, does in fact contain three different vegetables (or are they fruits?). Slap it on your deep-fried Mars bar and don't worry about the visual similarity with diarrhoea.

These may be fruit and they may be vegetables, but in either case a portion is pretty tiny and shouldn't make you cough too much. The more depraved among you may want to create little lines of them and snort them through a straw.