From Uncyclopedia, the content-free encyclopedia
(Redirected from Gympie)
Jump to navigation Jump to search

For those without comedic tastes, the so-called experts at Wikipedia have an article about Gympie, Queensland.

Gympie (also known as Hell town) is one of the major cities of Queensland, Australia. Known to most as the trend capital of the world, however is also known for its overwhelming amount of mullets (sported by both male and females), dragon tattoos and shrivelled, filthy thong wearing bogans. Many have lobbied for it to be named capital of the universe, however its close rivalry with Ipswich and Poowoomba have hindered its selection as Daniel Poon (Member of the Universe Capital Selection Committee), has been cited as stating "Gympie needs to get its priorities right - sure I hate those inbred Ippy and Poo town rascals, but the town's energy needs to be more focused". 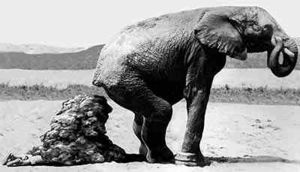 Gympie regional council has many great policies. One important policy is the two headed policy. This is achieved by allowing the construction of a nearly constant polluting Chipboard and Nestle factory very close to town and people's homes but also by the spilling of 2,4-d at the Gympie Regional Council Depot, John St, 100m from One Mile School. The motto and aspiration of the town "Two heads by twelve", has been lifted to "two heads by two", and the council have been very pleased with their progress towards this goal and continue doing great work towards its achievement. Another great policy is the axing of the conservation partnership program with little community consoltation. The council, citizens thought, were meant to be their representatives, although many have been seen arguing with their other heads about this.

Another council policy is to make road works drag on as long as possible, so that even though Gympie is a remote town, residents can find themselves stuck in traffic on a daily basis. In waiting in these frequent traffic snarls, the visitor will note that 90% of residents of the town seem to own, or have stolen, a well flogged white Holden Commodore (1980-86 preferred). If upgrading one intersection takes a year this cleverly gives the illusion that more money is actually being spent on roads in the area than it actually is. As one gymporian noted to his other head, "I ain't mind is so much aiiii, it's not just thems fancy city folks whos get stuck in traffic, gympie's coming a long way aiii." 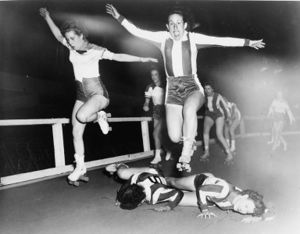 Gympie residents head for higher ground during the flooding in 1970 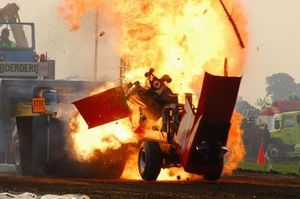 Founded in 50000000 BC by that new bogan trolley guy down the road at Coles, originally connected to modern day Iceland, it was a major port developed by prehistoric (even though nothing pre-dates history) merchants, it prospered into a prosperous township consisting mainly of Triceratops. Invaded in 1000000 BC by Neanderthals, the new inhabitants laid down a solid foundation on which the basic morals and ideologies of true Gymponians are based.

A young Pilgrim, whose name is unknown (speculated to be Tom Cruise), came to preach the word of Xenu (God of Scientology) around 999999 BC. The Neanderthals embraced the religion with open arms, one member being quoted as saying "Grrr!", roughly translated into "Xenu is a merciful and great god, omnipotent, omniscient, omniparient, omnipatient, all knowing, all seeing, all producing and all waiting. His intelligence has no boundaries, his love and creativity are only surmounted by his lack of existence".

In 999998 BC, the Emperor of the Neanderthals, "Tom Green", signed a deal stating than Xenu would teleport the town to the east coast of Australia if he could have the king's daughter, Elton John's, hand in marriage. He agreed, but sadly Princess Elton died of AIDS before the marriage was official. Xenu proclaimed he would smite King Green, but sercretly admitted he was only using the Princess for her massive jugs.

After King Green's demise, Gympie's towns folk rioted and proceeded to burn most of the infrastructure. There only exists very sparsely scattered ruins of this era, such as "The Gympie Pyramid". The society collapsed shortly after that and the townsfolk returned to the trees. Some descendants of these people still exist in the area (See Yowie)

When James Nash arrived in the area in 1867, there was nothing but nothingness. James Nash had affinity for shiny things, so when he noticed a yellow shiny thing in the river while he was taking his yearly bath, he got very excited. He told others of his discovery of the shiny thing and this prompted the "Gympie Yellow Shiny-Thing Rush". Many people came and found more yellow shiny things, and everyone was very happy (mainly because they could afford to buy beer and get the latest hairstyles). After a few generations the yellow shiny things stopped being found, and people "just stuck around cause there's nothing better to do is there?".

Things to Do in Gympie[edit]

Whatever the hell you want, everybody is too stupid, drunk and stoned (in that order) to care what you're doing.

WARNING: Scenic views may not exist

The reality of Gympie is the most well kept secret in Australia. It is secretly the base of world domination. The two headed freaks are a front and a deterrent to keep the every day person unsuspicous and away from the town. Even the name Gympie was given to the town as a deterrent for people coming to the place. There are two reasons those in charge want to keep people away...one is gold (which they want for themselves) and two is to keep them off the trail of 'those in charge.' In reality Gympie was first known as Nashville but it was decided that that name was too inviting. It started as 'the base' after James Nash discovered gold in the area and those in charge naturally decided it should be their own. Andrew Fisher, known long serving Australian Prime minister from Gympie was the first in the secret society based in Gympie that controls everything. An observent person might note the prominence of the Freemasonry building in the town and if they keep their eyes pealed may catch a Gymporian with a tin foil hat secured to both of its heads...these are the resistance fighting for the truth to be revealed. Underground tunnels make up most of the town unknown to the many they extend down to where the Traveston Dam site is another area they have discovered is rich in gold and thus the real reason 'they' bought out the properties in the area. Sadly two headed mutants that are caught and known to be part of the resistance are used as slaves in their underground tunnels forced to dig gold and lashed daily with whips. You didn't hear it here *touch nose*.