From Uncyclopedia, the content-free encyclopedia
(Redirected from World War C)
Jump to navigation Jump to search

The information contained in this article is dangerous.
Do not try this at home, kids; go over to a friend's house.

“This war is gonna happen.”

“This war could happen. I guess. How the hell should I know I'm just a frickin pundit, I don't know nothing about anything.”

“This war isn't going to happen and you're an idiot.”

~ Oscar Wilde on His future support for the Peoples Republic of Randy Jackson in World War C.

~ Baby Jesus on One of the few things which doesn't make him cry.

“I just love the feel of a nice fuzzy pussy.”

~ Double Entendre which is refering to Cats and not Vaginas.

World War C also known as World War One Hundred, World War 百, RAW is WAR, Sleepless in Seattle: The Directors Cut and (for some reason) Superbowl 9000, will be a war fought by the whole world, probably in the year 2070. It is a war which has garnered much critical acclaim since it was first released in 1969. IGN placed it at 97 on it's List of the 100 Greatest World Wars of All Time list, while Entertainment Weekly placed it at the top of its 50 Things That Give us an Erection But we Don't Know Why list. Entertainment Weekly reviewer Satan remarked "whenever I think about the utter stupidity of World War C I can't help but be aroused by it."

Although the war hasn't been fought yet we know it will happen because it was predicted by the grand poobah of prediction, Nostradamus (better known as n-Dizzle) on the 19th of March 1969 (9 years after he died). Nostradamus, after huffing 20 kittens and ingesting several tabs of super-LSD, used his own blood and semen to write down his final Quatrain on a cigarette paper he found in his underwear draw. This quatrain, discovered by the new owners of the deceased Nostradamus's Beverley Hills mansion is written as follows:

Although this is one of n-Dizzle's more cryptic quatrains, it is believed by many Nostradamus experts, town drunks and toll n00bs to prophecise a world changing war which might start in 2070 but also might start later, like... much later. This prophecy is especially important as it shows that between now and 2070 there will be another 98 world wars (we can't change the already predicted future so there's a good chance that another Bush will be voted into the white house before 2070 - most political pundits and internet nerds believe Jeb Bush will be voted in in 2016 and Barbara Bush's Zombiefied Remains will win in a landslide victory in 2048.)

Pre-War Debate - The Chicken or the Egg?[edit]

It's a well known fact that in the early years of Earth's existence, before they became common household pets for humans, Dogs and Cats were the greatest of allies. They fought off the Ostro-Emuian Invasion of Gondwanaland in 200 Million B.C. and also managed to succesfully exterminate their arch-rival's - The Dinosaurs - (with the help of Chuck Norris, Mr T, High Overlord Saurfang and a large Neutron Bomb) in 92 A.D.. However, this cute, cuddly and bloodthirsty alliance was ripped apart by the election of Sir Rover McDoggington the Ninth as the King of the Dogs in 1542. 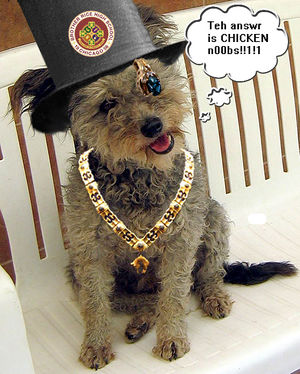 McDoggington believed that the answer to the chicken and the egg problem is that the chicken came before the egg and as King his word was law for every dog in the world. The Cats, however, disagreed with this due to their religion, Catolosism, clearly stating:

“And thy holy Sith lord Fluffykins answered thusly unto Osama "Thy answer thou dost toth seek is Eggeth to the question which thou asketh unto doth thou mine begat meow." Garfield then proceeded to lick his own genitals." ”

As more dogs came to accept "the chicken" as the correct answer to the ultimate question, the Cats relationship with the Dogs deteriorated. Sir Rover Died in 1566 after a long illness caused by him eating his own feces on a dare, however, by this time the damage was already done. The Cats and Dogs were the bitterest of enemies. Both species continued to hate each other's guts, limbs and reproductive organs even as they both began to unevolve into relatively stupid animals and became enslaved by humankind (under the leadership of Señor Frankenstein and Abraham Lincoln's mummified corpse) in 1888. 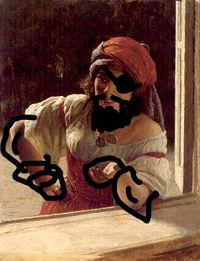 9 out of 10 Gypsy Pirates say's: "Magic ketchup bombs are frickin awesome. I think I took one of those that time i woke up in the gutter."

It has been predicted by many gypsies, jews and other enemies of Borat that in 2034 the world will become a very different place due to the founding of the Evil Clown Republic, the invasion of Canada by the Wikia Empire in World War LXV and the subsequent magic ketchup bomb explosion that will end the war but also cause all the dogs and cats in Canada to become super-intelligent mega-hyper beings which can walk on their hind legs and still lick their own genitals in public.

On the 5th day of Humpsweek in Smarch of 2035 president Jimbo will make it known that the people of Wikiland (formerly Canada) will no longer have to live with the constant clawing, public crotch licking and general super-intelligence of the dogs and cats of Wikiland. As a result of this "ejaculation proclomation" (as it will cum to be known) the super-intelligent dogs and cats of Canada will each be granted the right to start their own countries. The dogs, who's love of coconut milk can not be denied, will be given all of Fiji and fifty four sixty eighths of Tonga to start their new nation - The Canine Isles. The Cats, who's love of and horrible addiction to sweet sweet Opium also can not be denied, will choose to split Afghanistan in two and take the middle half to create their new republic - The United Soviet States of the Socialist Democratic Peoples Republic of Kittykatmanistan, better known as Kittykatmanistan. 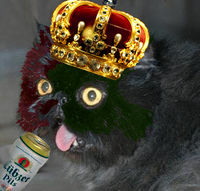 King Brent XII of Kittykatmanistan drunkenly sends out the order to invade the Canine Isles. Hookers not pictured. (Artist Rendition)

“"Secretary Fluuufyballs we need to start start shooting our missiles into their gaping canyons. Gather up some midgets, mental patients and airline hostesses's, put them on a magic carpet and whack them off to the canine isles".”

Evil magicians/Nostradamus experts such as Greenpeace and Harry Potter agree that the first line predicts how the war will first begin. From the year 2035 to the year 2069 the world will remain a relatively peaceful place; only 25 world wars will take place in this time and not all that many people will die in these wars, only like 20 billion or something, basically the whole population of India in the year 2052. However, even in this time of peace, the Dogs and Cats will continue to squabble over the question of the chicken and the egg. The act which will finally start an all out war between the two species will come on the 19th of Julembuary 2070 when, after a hard night of booze, hookers and premium Portugese catnip, King Brent XII of Kittykatmanistan will drunkenly declare war on The Canine Isles. The final line of the press conference, an order from King Brent to the Secretary of Defence - Flüfball II, will become an overused internet meme very quickly - appearing in 100,000 Uncyclopedia articles in it's first day of existence.

Everyone Jump on the War Wagon[edit]

The quatrains second line appears to predict that by the morning of Julembuary 20th every world leader will have heard the news and most will have picked a side: