From Uncyclopedia, the content-free encyclopedia
< User:Llwy-ar-lawr
Jump to navigation Jump to search 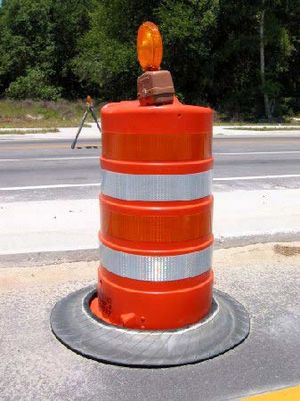 A Orange Man-Eating Construction Barrel in its natural habitat

The remarkable thing about the Orange Man-Eating Construction Barrel is that its life cycle is nearly identical to its friendlier counterpart.

Fabriforms begin life as small shards broken off from the parent plant. These shards work their way beneath the surface of the asphalt, either through weather processes or through compaction beneath the feet of other animals. These seeds lie dormant through the winter and begin to sprout in early summer when the rising temperatures cause the asphalt to expand and become malleable.

One can tell that the seeds of the construction plants are nearing the point of germination when the road surface becomes rough and uneven. Potholes may begin to form. This is the result of the most fascinating ability of the fabri- and pillaform genii: they form their tough exterior shells by absorbing and excreting the surrounding material. Fabriforms digest asphalt and rework the crude oils into a plastic shell, while pillaforms sprout from bedrock and cobblestone streets. The composition of this material affects the outward appearance of each fabriform, but the federal guidelines for road asphalt mean that very little variation is actually expressed.

The seedlings have a variable maturation period - some may take several weeks (or even months) to reach full germination, others may appear and fully mature seemingly over years! One thing about the life cycle is certain - when the plant develops its fruit (an orange light), it is ready to be harvested. The Orange Man-Eating Construction Barrel should not be harvested as the Man-Eating Barrel will consume anything near it. This is how you can tell the differnce between an Orange Construction Barrel and the Orange Man-Eating Construction Barrel. The fruit - or light, does not blink. This is the only way to differenciate between the Orange Construction Barrel and the Man-Eating Barrel. In certain counties in Inglund, harvesting happens underage, in the traffic cone stage. This often leads to many wounded harvesters, as the young are very feral, and cannot eat a full-grown man yet.

Once the fruit of the Orange Man-Eating Construction Barrel is large, the plant is fertile and ready to reproduce. Much as the scent of a flower attracts insects, the light attracts animals and vehicles that will help spread the plant across the roadway. (Sometimes, however, the animals and vehicle are devoured.) Even one piece of the fruit can eventually grow into a full-fledged plant by the next summer. Byproducts of the reproduction process are used to make Shredded Wheat cereal. Genetic variation comes from a type of cross-pollination; if two fabriform seeds contact each other they share plastic material as they mature into one plant. The larval form is known as a traffic cone.