For those without comedic tastes, the so-called experts at Wikipedia have an article about Tornado outbreak of March 24–26, 2021. 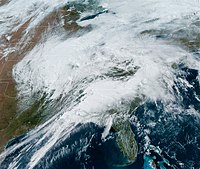 OHITOCHEE, AL - Remember when a tornado outbreak infected the South? Well, it wanted round 2, and it got it. Fewer tornadoes, but more damage. It began at 7pm on March 24, in Texas, but no damage was reported. However, at ~1:30pm in Alabama the next day, the tornado infection began. But unlike last time, they have new tools. For example, they now use mosquitos to spread it, due to it technically being spring. Six people died, plus one indirect, two were infected but are alive. Oh, and people in quarentine is unknown.

An EF3 tornado struck central Alabama around 1:30pm and moved for 55 kilometers. But, damage is unknown and it couldn't infect anyone. Minutes later, a tornado in Mississippi and Alabama that was EF1 crossed the border from 1:36-1:42pm. It moved for ~9 kilometers and was half a kilometer wide, but no infections. At that time, an EF2 in northeast Alabama not only infected, but killed 5 people. Damage was extreme due to that, and quarentines are high. At 6pm, an EF0 struck northwestern South Carolina. Nothing significant at all. Three kilometers and twenty meters is puny.

A tornado carving out 75 miles of Alabama struck from 4:25-6pm. Btw,times are local time, this is -5, the SC was -4. But you are an idiot if you didn't know that. At 4:48, a weak EF1 in central Alabama, and walked into an airport, but it was evacuated. An EF0 in southwest Kentucky struck at 7:25pm. Two tornadoes touched down in Kentucky, one at 9:15 and one at 9:45 when the sun was down and no one could see the virus. Both were weak and both didn't infect.

From 9:58pm(-5) to 12:38am(-4), a tornado struck Alabama and Georgia. It killed 1 person from COVID, and was an EF4. Winds 170mph allowed it to spread from Florida, which has tons of COVID. Moving for over a hundred kilometers, damage is unknown. It was the first EF4 in Georgia in ten years, since a much shittier EF4 in northwest Georgia killed 20 in 2011.

Two people were infected, but survived, from a tornado at 2pm in central western Vermont. It was EF1.

One other person died of COVID from wind in Mississippi. Unrelated to the outbreak, because 85mph winds still are horrific. That's an Isaias, and it is so strong that it can blow COVID from New York to Hartford in under an hour, and it is basically death. It struck someone, and they died.