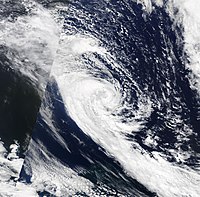 Subtropical Storm 01Q on Feruary 6, 2021. A rare sight, especially the <cough>3rd of the year! Not the last either.

The 2020 Atlantic hurricane season was bad and crappy, but the 2020-21 South Atlantic is even crappier! 2019-20 saw Subtropical Storm Kurumí kill 3 people in part of landslides that killed 70 in January 2020, but this season is the most active ever recorded.

Most storms were subtropical and weak, with winds 40mph. Mani was in late October, which is essentially identical to late April in the Northern Hemisphere, which only happened 3 times.....and only once since anyone NOT eligible for the COVID-19 vaccine was, which was Tropical Storm Arlene in 2017. Mani then struck a Brazil, doing no damage. Oquira was in late December 2020, no damage or deaths, and only those 40mph winds. Tropical Storm 01Q wasn't even named, despite being fully tropical, as it only lasted for six hours before a fucking advsiory could be launched. Maximum winds were...40mph. We don't even have a track map. It was in mid February.

Then, a currently ongoing Subtropical Depression with 35mph winds is ongoing. It is 700 kilometers from Brazil. [1]

This is so notable as tropical cyclones rarely even fuckin' form here, so to see 3 in a tropical cyclone year is quite unusual, especially in such pre season conditions. Other rare areas of formation, we are informed, is anywhere not within 30° of our boiling equator, anywhere within 5° of the equator(wow), the southeastern Pacific Ocean, and the Great Lakes(I guess there not great for tropical cyclones?)