AMERICA, USA -- The major news stations in the United States, CNN, Fox News, and NBC, have started airing predictions of the results of the 2012 presidential elections, after already deciding what the outcome of the 2008 election will be.

"We found ourselves facing quite a dilemma," says the president of a prominent news corporation, "For about four weeks now, we've been airing report after report about how blisteringly, painfully obvious that Hillary Clinton is going to be the next president of the United States. After all, she has a lead of almost .0005% in the latest polls! This temporary, meaningless fluctuation obviously indicates that she will win by a major landslide, and defeat Barack Obama very dramatically!" 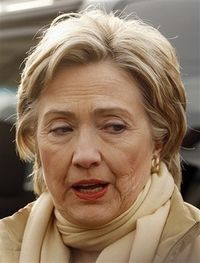 The next president of the United States, according to the latest unreliable polls.

But, since the media had already decided on who was going to win the election, there was no longer any suspense in doing election coverage. "Since we already decided who was going to win, it seemed pointless to report any more on the election. So we had to think of some other sensational story that could keep the American public entertained. And it's not like there's anything major going on in the world that we could report on."

News stations tried to compensate by airing hour after hour of touching human-interest stories about three year olds calling the police all by themselves and saving their mommies. But this well of journalism quickly ran dry and again left the media with nothing to report on. But then, CNN journalists got a brilliant idea: "We've decided the results of the 2008 election...why don't we just move right along and decide who'll win the one AFTER that!"

And so, many stations have begun airing DECISION 2012 specials, in which they confidently state that Condaleeza Rice will captivate the nation and win in a tight election. Most journalists are extremely confident in their predictions, or, as Sean Hannity put it, "I am absolutely 100% certain that, in 2012, Condaleeza Rice will become President. Absolutely certain. Don't think I'm right? But I'm from the media! The media's always right! Hell, we were right when we said Dewey would defeat Truman! It's the place of the media to decide who will win the presidential election, though some foolish people will try to convince you that it's the place of the people. Obviously, they aren't very patriotic."

Textbooks are already being written based on the media's highly reliable predictions. NBC, with hopes of overshadowing the competition, is planning on airing coverage of the 2016 elections in a few weeks. "At this rate, we'll have mapped out the entire future of the United States by the end of the month," said an NBC chairman happily as he flipped a coin in order to decide which candidate he'd support.