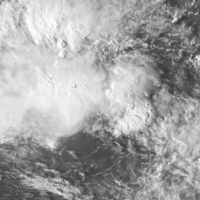 The so-called experts at Wikipedia do not have a proper article about Error with Tropical Storm Dujuan (Auring)'s wind speed. We are sorry they are this lame.

The Pacific has been more active this winter then most.

It featured a tropical depression on January 19-20. It struck the Phillippines butt, killing a man and his butt, and causing $10.8 million, but it does not count as it was not considered a TD by JMA, only unofficial and stupid JTWC. (They are such idiots, they thought Fani's pressure was 32 millibars lower then the IMD!) It put the Phillippines on Signal #1, meaning tropical depression winds possible within 36 hours. It was at 11pm local time for them on February 18, which is 15:00 UTC. The storm previously almost fucked up Palau, and is currently at 7.2°N 131.9°E(at least as of 15:45 UTC). I know this is boring, but there is a problem. A big one.

THE WIND SPEEDS ARE FUCKING OFF!!!!!

What I mean is that JTWC is saying one minute winds are 40mph, but JMA is saying ten minute winds at 45mph! How can that be fucking possible! I don't know! If this weird user called Andrew5/Gale5050/HurricaneTracker495 ever gets unblocked, I can assure there will be an RFC to get rid of the JTWC nonsense!

It is practically like Hurricane Dorian, in that it is stationary. Still the Phillippines is going to feel the effects, Chuck, just a matter of time. Will it survive the journey, we don't know.