In politics, there are generally 2 political parties - and the United States is no exception. The Democrats/Republicans(or Democrats/Whigs if you go back to 1828 - and we aren't going before that because half the times they weren’t elections). Surprisingly 1992 didn’t see Ross Perot get an electoral vote, but that was because he made a lie, so no one liked him.

Well, if it ain't Andrew Jackson running for re-election. He beat Clay, who also ran against him in 1824 and stole the election from him in a scandal....long story 219-49. But John Floyd of the Nullifier Party and William Wirt of the Anti-Masonic Party got 11 and 7 votes and each won a state. Floyd won South Carolina, but it's really confusing and even Wikipedia doesn't have a good article about it. Meanwhile, Wirt barely won Vermont, winning there 7 votes. Actually, Wirt is the only one we have any information at all on. Fuck you, Floyd.

Millard Filmore wanted back after losing the Whig nomination of 1852! But he was weak, as the Republicans and Democrats were stronger. It was 174-114-8, with 174-114 being Democrat-Republican. Fillmore won 8 votes and the state of Maryland. How?

Well, either side would result in a civil war, and Maryland was glue holding us together, and so would have Fillmore. Maryland is still glue, as it is the only way to get to DC from the Northeast. At least without driving an extra 500404030302929495455 miles.

Well, Lincoln won 180-72-39-12. And, the Democrats split. The southerners won 72 and the northerners won 12. Southerners won 11 states, every single confederate state except Virginia and Tennessee, and Maryland and the state of Joe Biden. This was Breckenedge, incumbent vice president. War was erupting, and they literally had a boxing fight in Wheeling, VA. The northerners only won Missouri, but some crazy smoke in New Jersey allowed 3 to be given to Douglas. And John Bell won Virginia, Tennessee and Kentucky, winning 39 votes for the Contitution Party. Ok, holy shit no wonder there was a civil war after this.

Holy shit this is chaos. That one light green vote from Missouri is for Davis.

All of Greeley's 63 votes were scattered and it's really confusing. He was supposed to win Texas, Georgia, Missouri, Tennessee and Maryland, and it got scattered. So, here is who got the votes, Hendricks got 34, he was very persuasive, Brown got 18, Davis got 1, jenkins got 2 and Greeley somehow got 3 from Georgia.

Populist time! Cleveland won against Harrison, 277-145, but Weaver got 22? And five states. Ok what?

He won North Dakota, Nevada, Idaho, Colorado and Kansas. But ND split there vote 3 ways, and he got a vote in Oregon. Why? Because of splits and unpledged electors! Michigan had a 9-5 split, Ohio was 22-1 and California was 8-1, all to Harrison. This was a thing back then. 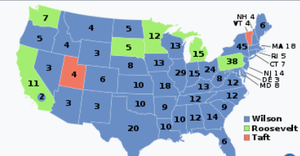 Teddy Roosevelt got 88 from the Bullmoose Party, better then the 8 from the Republicans. But the Dems did get 435. Teddy Roosevelt got California, but that stupid electoral system gave Wilson two votes, and it was close as shit. Washington, South Dakota, Michigan, Minnesota and Pennsylvania also voted for Roosevelt, but Taft won mormons and Vermont. HAH REPUBLICANS!!! NOW YOU GOT 3RD EH???????? Yep, but the Bull Moose Party still lost badly.

It's progressive time! Ole! Wisconsin and there 13 votes were won by LaFolette, a progressive. The Republicans kicked anus again, 382-186. Yeah, they did pretty bad. But better then the 45+ times they got nothing, right, right?

Also, this was about the end of 3rd parties getting something. You'll find out. Though it wasn't really much of an "era", they never really did well.

Democrats had a teeny tiny split. Truman beat Dewey 303-189, but Thurmond got 39 votes, winning Louisiana, Alabama, Mississippi and South Carolina, and a faithless elector from Tennessee who was supposed to vote for Truman, but nobody cares. Dewey almost won, and he got angry and punched Truman in the nose because of it. Then he strangled Strom Thurmond, who likely cost him the election.

And the last that a 3rd party got a vote (stop crying Ross Perot, you got 19% of the popular vote but didn't win any states), George Wallace got 46. One was a faithless elector from North Carolina that was <cough> supposed to be voting for Nixon, but he still got Louisiana, Mississippi, Alabama, Georgia and South Carolina. Nixon beat Humphrey, 301-191. Humphrey immediately called out Richard Nixon to committing a scandal, but that wasn't confirmed until 1974, after he already won a landslide election in '72. Humphrey then attempted to have his men kill Wallace, but that was postponed till '72 as well.