Stuff is the fundamental essence of the Universe. Stuff fills the the inside of the outer lining of the universe (technically known as the Spatial Attribute Container - Sac). Stuff is often considered to be an agglomeration of things but paradoxically a thing is also made of stuff. This paradox is known as the stuff-thing duality wotsit, whereby all matter appears as a thing if picked up but also as a collection of stuff when dropped hard enough. However, Chuck Norris can instantly determine if any object is actually stuff or a thing. For stuff to be useful it needs to be able to do something. That is why there is a universal scale for the importance of stuff and this is measured by many things.
more about stuff…
edit

A rare Red-Breasted Wardrobe, thought to be extinct.
A wardrobe is a horrible creature of yore known for inhabiting the attics of old professors' homes and eating small children. Wardrobes cause those in and around them to believe they are in a fantastic land fraught with magical peril, an effect theorized to be caused by the mushrooms that grow deep within the wardrobe's usually musty body cavity.

In the early 16th century, adventurer Parco Molo set out on an epic quest to find, name, and subsequently kill every species of animal in the world. But he never expected to encounter such a terrible monster as the wardrobe. Wardrobes, of course, have existed long before man - possibly even before time. The local tribesmen of the Commonwealth of England had told Molo of such a creature they called "The Royal Wardrobe," or "Great Wardrobe." At the time, Parco dismissed the thought of a seven-story high behemoth that consumed mass amounts of orphans as a mere legend, but it was not. (This massive wardrobe was also used as a storehouse for royal accouterments, housing arms and clothing - among other personal items of the Crown.)  (more...) 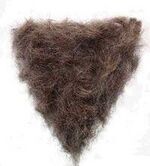 A cheap merkin, such as a prostitute might wear.
A merkin is a pubic wig. According to the Oxford English Dictionary (OED), which is an authority concerning such matters, prostitutes once wore merkins to disguise the fact that they had syphilis. Etymologically, the word is believed to be derived from malkin, meaning "mop." Not only did this hairpiece do duty as a pubic wig, but the merkin, apparently, was used to mop floors (or, possibly, just to "mop up" after sex). Not to be outdone by the fair sex, men also occasionally wear merkins, and some even enjoy flashing their faux minges at unsuspecting passersby…

Like other hairstyles, those involving the merkin indicate gender, fashion trends, social status, ethnic identity, and relative psychological stability (or, as the case may be, instability). Some merkin wearers match the style of their pubic wig to that of their hairstyle; others enjoy a stark contrast between the two, wearing their hair, for example, in a traditional style, such as a pageboy, while dying their merkin neon orange and wearing it in a Mohawk or in cornrows or dreadlocks…  (more...)

This isn't my cat, but I like it.
Today is My Cat's Birthday

COLUMBUS, Georgia - Hey, today is my cat's birthday. He is eleven today. I've had him for most of both his and my life. He's really nice, even though he attacks other cats. And people. He doesn't like people. Except me.

We've had him ever since he was about two or three months old. We got him after my mother got done serving her community service at the animal shelter. That's where she served most of her community service, anyway. She also did some of her probation at Habitat for Humanity and at the airport. That's right. Half of the people who work at the airport as security screeners are people serving time. How else do you think 9/11 could have ever happened?

My mother had to do something like 200 hours of probation along with going to weekly AA meetings after she got a DUI. Guess where she got the DUI at? In a Chuck E. Cheese parking lot. Seriously. We went there because it was my fifth birthday. As I played, she got extremely wasted. Who knew they even served alcohol at Chuck E Cheese? Well, apparently they do. Or at least did. That was the only time I ever went to Chuck E Cheese. And people wonder why I'm so fucked up in the head. My birthdays always suck.

So anyway, my cat is eleven today. He sleeps a lot. He likes sleeping in front of the air conditioner where it's nice and cool…  (more...)

The Grue Crossing signs have proven to be an effective way to prepare drivers for an encounter.
Image Credit: Kaizer the Bjorn
edit

Ludwig Mies "Vander" Rohe (German for Ludwig Evil Of The Brutality) (March 27, 1886 – August 17, 1969) was a German (or possibly Austrian) fellow who reinvented architecture in the early-to-mid-20th century by creating buildings that looked like big glass cereal boxes.

Rohe grew up in a small suburban town in the southwest of Germany (or possibly Denmark). His father, Emilio Rohe, is widely credited with inventing the elevator call button-- before him, people had to shout what floor they wanted very loud and hope that someone already inside the elevator would come down to get them. His mother, Mikembe Rohe, died in a tragic blimp accident when Ludwig was three. As a result, Rohe was raised believing that he was pooped out by a pterodactyl...  (more...)