Ketamine is a white, crystalline powder that, when consumed via insufflation, injection or orally, provokes the ability in enlightened individuals to reach the astral plane whilst awake, giving the user the soul of a sentient but drunk robot temporarily, meaning movement becomes mechanical, rigid and haphazard. As such, it has been banned by most governments around the world, and merely possessing 200 milligrams of it is enough to get one put on death-row in the US. 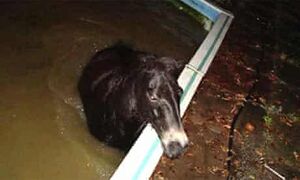 Horse who's had too much ketamine taking impromptu bath to wash away the sin.

Ketamine is extracted from eggplants and horse manure in equal measure, the latter being due to the fact horses enjoy getting 'fucked up' or simply 'hoarse' with alarming regularlity, necessitating the deployment of gun turrets next to their manure and near eggplants. It's a mistake they only make once. Eggplants are actually banned for cultivation by the UN as a result of this so mediums have been employed from around the world to extract the ketamine energy from eggplant emojis on Facebook Messenger and TikTok. This has yet to work but Persephone Lux-Credere, the primary medium working on this project, assures the wider astral community that she's "close" and merely needs to solicit $3,000,000 more in donations on GoFundMe to resume her vital work.

In small, infrequent doses, ketamine merely increases the will to live and imbues its host with temporary supernatural powers to perceive the world for what it truly is: confusing, messy and, according to one scholar, Oscar Wilde, "it's like everything is folding into itself maaan."

In higher, recreational doses, ketamine sends one to the netherrealm temporarily such that they can witness the beauty and majesty of the grid-based Matrix world we live in. Unfortunately, one's corporeal form in the real world remains for the duration of this effect. For this reason, it is recommended to do ketamine somewhere safe such as a school or graveyard.

It is rumoured that JFK got the idea for the moon landing when he had taken a particularly large dose of ketamine, thinking he had travelled there himself, meeting a beautiful woman called Mindy. He insisted on hundreds of billions being spent on getting to the moon just for the chance to see her again. Mindy was in fact real but she was, as it turns out, a whore from Ipswich he'd previously met whilst on an international trip to England.

Ketamine does not have any side-effects. Everything that happens, including death, whilst high on it was planned by Our Lord, who in fact created all morsels of ketamine in the universe because he knew it'd fuck with us, and it sure has.

Ketamine only kills 26,000 people daily and this is set to reduce as the death squads get under way in each country whose deployable drones can fire 1,600 rounds of .50cal ammunition directly at any human being detected to have been near ketamine in the past 24 hours. Some feel that this policy is too harsh but they're dead now so it's okay.