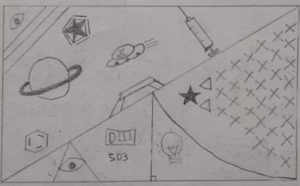 The National flag(Rated no. 1 On the Forbes Best Flag list)

The word Kabanjan is derived from the names of the Supreme leaders of the Country - Kabiish (Alternative spelling of capisce) And Prabhanjan (Sanskrit name Prabhanjan (Sanskrit प्रभंजन) literally refers to nerve disease, hurricane or storm.) Kabiish + Prabhanjan. The Names arose in the formative years of the country in 8th D, with the ease of pronunciation and meaning allowing it to spread amongst the plebeians (A section). The addition of Manavasia was considered for a period of time, the new name being Mankabanjan but was scrapped due to the name being described as "Retarded", and with Manavasia's constant revolts.

Back in 2017 when the two Supreme Leaders were in 7th standard they decided to come up with acronyms for everything they wanted to say and eventually ended up with SPBIA - Srikabiish Prabhanjan Bench Invading Association.They liked it so much that they decided to write it on as many benches as they could, eventually claiming them as their territory and laying the foundation for the development of the country.

The Kabanjan constitution is noted to be extremely well-written, and is described as 'The best in the world'. It is often applauded for its harsh rules which restrict the actions of rebels. Some rules which are of particular interest include:

The constitution also includes information on the country's national anthem, namely 'Old McDonald had a car''. It also details the various national songs, including 'Who toucha ma spaghett'and'Jaaaiii to the Wurld' (2nd deluxe edition). The constitution also states that Kabanjan is the 'best country in the world'. However, various world leaders including Kim Jong-Un of North Korea have disputed this claim.

The constitution of Kabanjan was originally supposed to be typed out in all its glory here, however the supreme leaders decided that it was in the country's best interest to not spam the entirety of uncyclopedia with 2.6 billion pages of pure unadulterated knowledge.