Frybread is a deadly, fattening, nutritionally void, deep-fried golden dough pancake. Originally invented by Dr. Destructoidio to exterminate all “Indians” faster than clubbing all their bison down, frybread has become a staple of the diets of pedestrians, Taco Bell fanatics, underpaid Taco Bell employees, Mr. Tumble, Big Bird, and you. 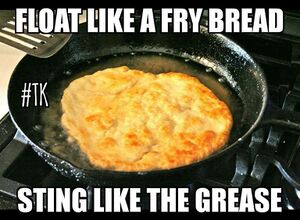 OUCH! The grease stings harder than a pissed off bee on steroids!

To make room for a highly advanced Anglo Saxon wonderland, Dr. Destructoidio forced Navajos off their vegetable gardens, offering them tonnes of powdered, dried food to prevent starvation. Using his scary megaphone, Dr. Destructoidio shouted “MAKE SOME FRIED BREAD DOUGH OR SOMETHING! Or my comrades will beat you with a whip!”

Such an event was known as “The Long Walk”.

Fearing for their lives, the Navajos mixed up some flour, water, dried milk, dried eggs, and made a dough out of it, frying it in lard or bacon fat until crisp.

According to Captain Obvious, the creation of frybread is incredibly simple for simpletons. You basically make some bread dough, flatten it out, and you fry it in piping hot gutter oil. To put vegetables or spices into your frybread, you have to have OVER 9000 functioning neurons in your brain, you little wimp. 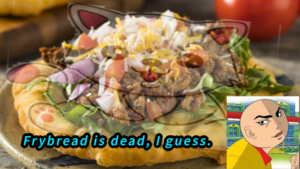 Frybread dramatically increases the risk of alzheimer’s, extreme obesity, AssBurgers, becoming a star on My 600 Pound Life, pimples, gangrene, being outcasted by society more than the AVGN and Chuggaconroy, and becoming a walking Fukushima nuclear radiation plant - emitting stinky-ness and grease instead of uranium.

If you dip the lard sponge in chocolate or sugar glaze, you’ll drop dead instantly of da beetus and ascend into Carb Heaven. 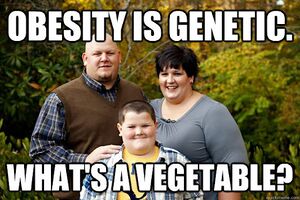 The superior intelligence of Manifest Destiny, placed onto their victims.

If you eat too much frybread, prepare for your body to become a lard-filled Jabba the Hutt and the experience of agonizingly surviving on shelf-stable commodity foods!

As commanded by the divine lords Atheist Jesus, Sonichu, and Lord Tumble, the people of South Dakota are on a jihad to wipe this lethal substance off the face of the earth. The Sioux Chef conceptualized non-frybread foods, shouting “FRYBREAD IS DEAD!”, holding up signs, and marching on South Dakota’s streets against the chubby chalupa bread.

Because of this, the Sioux Chef is being imprisoned in an Alabama concentration camp by the CCP and United States government. The captives are being force fed irradiated Twinkies, being whipped with Twizzlers, and force fed Coca Cola from a hose. They also have to pick cotton and okra on $1 daily.

Absorbing any of it may cause one's brain to a splode. You can help Uncyclopedia by cleaning it up..